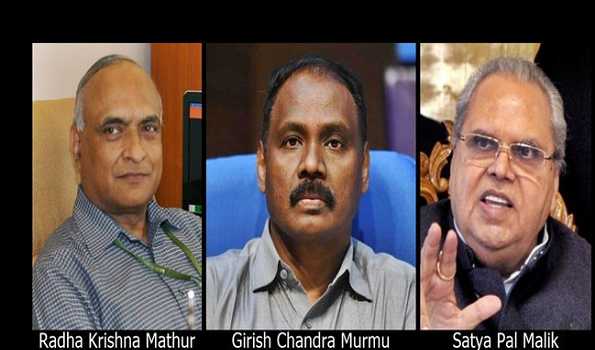 New Delhi, Oct. 25 (UNI) Jammu and Kashmir Governor Satya Pal Malik who presided over affairs of the State when the government in August abrogated Article 370 and bifurcated the border State,  was on Friday night transferred to Goa Raj Bhawan.

Mr  Malik was shifted from Bihar on August 21 last year to the Raj Bhawan in Srinagar, replacing the veteran administrator and bureaucrat N N Vohra who had a long and extended tenure lasting a decade as Jammu and Kashmir governor. Mr Malik was shifted to Srinagar as the government felt the need of having a political heavyweight in the sensitive border State. New first citizens of Mizoram and Lakshadweep UT were also announced.

The new gubernatorial appointments come just six days ahead of the deadline of Jammu and Kashmir and Ladakh becoming two new Union Territories on October 31. Parliament had given its nod to abrogation of Article 370 and bifurcation of the State in August. Kerala BJP President P.S. Sreedharan Pillai was appointed as Governor of Mizoram, according to a Rashtrapati Bhawan communique.

Former Intelligence Bureau Chief Dineshwar Sharma and at  present Interlocutor for Jammu and Kashmir was appointed as Administration of the Lakshdweep Union Territory, the communique said here on Friday. Mr Sharma, an IPS officer of Kerala cadre, was Intelligence Bureau Director for two years from January 2015 to 2017.

During the first  term of the Modi Government, his appointment as  Government’s representative for Jammu and Kashmir  was announced by the then Home Minister Rajnath Singh in October 2017. He was  assigned to talk to different groups of people in militancy prone state. Mr Sharma was instrumental in Government’s decision of non-initiation of combat operations during the  Ramzan in May 2018 and withdrawal of cases of stone-pelting registered against youths of Jammu and Kashmir.

The communique said the new gubernatorial appointments will take effect from the dates the appointees assume charge of their respective offices.