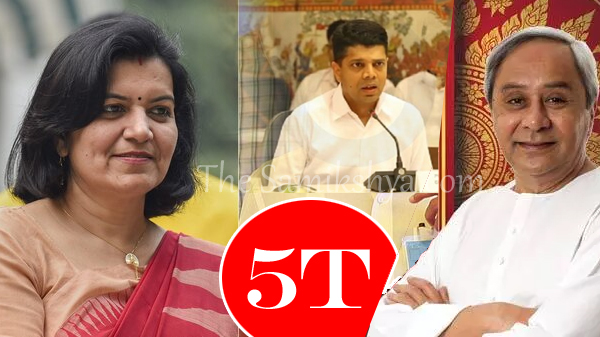 After a pause of few days politics in Odisha has cantered around one thing and that is 5T. Right from the Congress to the Bharatiya Janata Party, there is a smoke of abhorrence at each political masterstroke generated by the Naveen Patnaik-led government here.

Since the time V K Pandiyan stepped out the state secretariat as the head of the 5T and visited some hospitals taking stock of the situations or punishing a few for derelictions, frowning hoods were raised and obviously painting the exercise, allegedly,  as an orchestrated administrative drama or show for popularity.

The practice was not unprecedented. Earlier also few officers used to do it but then the preening media cameras were very few or not there. It was just because that Pandiyan is in the focus, the optical illusion of the opposition got more chronic to discover a devil in the exercise.

What is wrong in that, if, an officer who had proved to be an able administrator even before coming to Bhubaeswar, does it again as mandated by the boss. Even there are some hear-burnings within the administrative apparatus also, which may be a normal thing anywhere.

In the past few years also, the chief minister at many occasions had issued such instructions to the officers and even politicians to get down to bottom reality by personal visits but the responses, if seen in hind sight, were few and far between.

So, why now raising heckles on this exercise and chose a selective attack on an individual officer . ‘Drama’ or serious, if one executive can generate a combined effect which is as good or better than the sum of separate effects, there should not be any wrong in that. The ultimate goal is that the benefit must percolate down to the people and there the buck must stop.

Now, the former IAS turned politician Aparajia Sarangi has also joined the opposition bandwagon to interpret the 5T exercise as a model that can impair things further than doing good. A member of Parliament, Sarangi, who yet has not been able to wriggle out of her bureaucratic air and aura, now stands pleading for her erstwhile colleagues she did not bother in the past.

Sarangi has maintained that, the 5T is an unnecessary exercise that not only berates the officers who, already are heading the departments and  it is an exercise in futility that would simply generate huge demoralising impact on the existing officers.

As a politician from the opposition camp she has reason to see red in the 5T formula but as a former bureaucrat she must be privy to the realities at the ground and so her suddenly going ballistic at 5T of Pandiyan requires a second thought. If the BJP is so concerned about show ups, then it must use a better lens to see what NDA does at the Centre.

As the MP for Bhubanerswar, even Aparajita should go round the city to see for herself how sanitation in the city suffers from neglect, gaping holes on the roads and an unregulated traffic congestion. Has she any road map?

Pandiyan may be trying at presenting a role model for others but this is an official vigilantism sort of thing that the chief minister has introduced through a new nomenclature only that requires to be a regular practice by all.