A give and give syndrome seems all pervasive, where a common man finds himself right in middle of quick sand 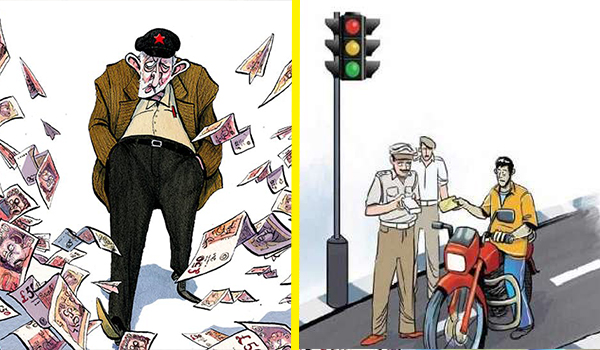 It is a scene of colossus confusion all around, everywhere. One finds himself in the middle of a confluence created by situations unforeseen where there is no give and take as the norm but, it is all about give and give.

Purists in the field of economy are too economical to tell people what really goes on and what more to come. Whereas, apologists work overtime by whatever means they can, to defend a situation that hurts the majority.

Now it is irrelevant to indulge in any throw back to the days of demonetisation and so on. Which is heading to history in a way.

However, the latest among the discomfort is the abrupt descending of the penalising procedures undertaken by the rulers at the centre, to discipline the erratic traffic system which required a very strong handle against the violators on the roads.  It is always good and safe to be disciplined on or off the road but any model that is imposing and creating a kind of phobia, may appear bit unacceptable.

Violators must be punished and the latest enforcement of traffic regulation model is nothing new except the fact that it was abrupt and monetarily untenable due to various reasons. There were all the rules in the book but were neither being followed by people nor were being enforced the authorities who have suddenly got off  from a slumber. Then, perhaps, it was give and go and now it is give and give.

Any such promulgation must be given a breather as a period of gestation for refreshed awareness rather than an overnight tool to punish the offenders.

Apologists for such campaign are not in a mood to listen to any other logic whatsoever as regards the population, road condition, a traffic friendly avenue and affordability. Pinning down the ones already drowned in a kind of financial hardship are left to fend for themselves against an almighty custodians of traffic regulations.

From the wallets to accounts:

It is not all about traffic rules that the people are battling at the moment but there are fears about other such penalising systems in the waiting that people may face. The merger of banks was long awaited and has been done with good intentions but what about the fall outs. People have a right to know.

Bank mergers may bring about a situation when the loss making banks may weigh on the bigger ones and to ward off those deficits, the banks may change their modalities which ultimately inflict on the common man only. Experts hold the view that, a time is in the offing when the banks shall be under certain compulsion to make capital out of a common depositor’s money.

There is fear that, an account holder shall be left to the mercy of the banks again as regards utilisation or withdrawal of their own money. About 63 % of Indians keep their money in the banks but can they be able to weather jolts like ceiling on their capacity to withdraw. God forbid, but there is a fear that,  compelled under circumstances the banks may be forced to hold back an account holders money and put a cap on your withdrawal.

How can the banks do that and condone the step. Simple it is, perhaps. A parameter shall be fixed and the bank shall have the discretion to decide how much one can withdraw. It is feared that, such parameters may be fixed under bodies like Resolution Corporation Regulator under Chapter 4 section 2.

In that case your money shall be with the banks which they may invest in the markets and as regards your money, bank may have the discretion whether to return your money or not, as per your requirement. In that case the holder’s money may not be returned, may be and you may be given a share of the bank which may not give any dividend given the financial condition of the bank in the share market.

Media role at this time  :

Face to face with crises of all kinds where do people look up at? At the media, which appear to be caught in a cross wind. There is battle between the mainstream and the citizens’ journalism both seem trying to protect the sovereignty of the country. But, does that really happen.

That is a big question. Watch any national news channel, they have a pattern to follow, drawing their parameters as required under the circumstances.

When we watch discussions on crucial issues like functioning of the government at the centre, dissent is often construed as a kind of act not in conformity with the national spirit. Some news anchors step out of their bounds to play the role of an admonisher to muzzle your voice.

With the RTI rules allegedly getting or got diluted, there is a fear of a state control mechanism breathing down one’s neck. There is a concerted effort by a majority of channels to make a divide in between national and anti-national. Toeing a particular political line is what appear so clear.