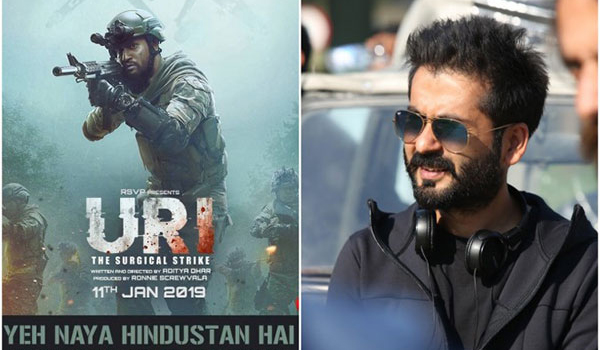 Filmmaker Aditya Dhar, who bagged the National Award for the ‘Best Director’ for Vicky Kaushal starrer ‘Uri: The Surgical Strike’ , dedicated this award to each and every brave soldier of India and their families.

Taking to micro-blogging site Twitter, Aditya posted a heartfelt message saying that success consists of going from failure to failure without loss of enthusiasm. “Fifteeen years of failures, rejections and hard work has led to this moment and it just can’t get better than this. Thank you India, thank you Ministry of Information & Broadcasting and all the Jury members of National Award committee for considering me worthy enough for this prestigious award. This is an honour I am going to cherish for the rest of my life,” Aditya said in his message.

“Being conferred with the National Award has been a dream since the time I understood what films meant to me, and films truly mean the world to me. Thanks to my family and friends for their unconditional support over the years. Thank you Ronnie Screwvala and my entire team of URI for giving it all and making URI what it is. This film wouldn’t have been possible without the mad obsession of each one of you to create something extraordinary for our audience.

But most importantly I am dedicating this award to each and every brave soldier of our country and their families. Thank you for all your sacrifices. You have selflessly dedicated your life to serve us and now it’s our time to dedicate everything we have to serve you,” the filmmaker added.

The film bagged four big titles at the National Awards– Best Actor, Best Background Music, Best Sound Design and Best Direction. ‘Uri: The Surgical Strike’ is based on the September 29, 2016 retaliation surgical strikes carried out by the Indian Army in response to the terror attacks at Uri, the army base camp in Kashmir that month.
The film also stars Yami Gautam, Paresh Rawal, Kirti Kulhari and Mohit Raina in the key roles.