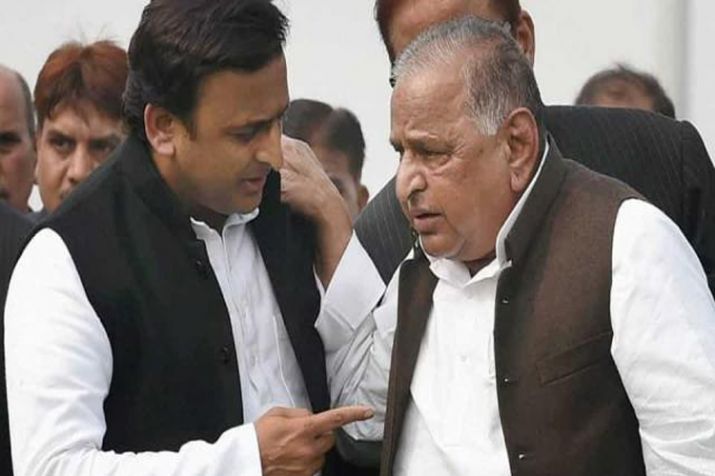 Samajwadi Party patriarch Mulayam Singh Yadav, worried about the exodus from the party, has sent a proposal to his son and party president Akhilesh Yadav to make efforts to rejuvenate the cadre after the Lok Sabha debacle.

He also expressed his willingness to take up the party president post in order to stop the exodus. Earlier this week, Mulayam Singh Yadav had summoned his cousin and SP general secretary Ram Gopal Yadav and asked him to speak to Akhilesh Yadav and convene the meeting of the national executive of the party for the change of guard.

Akhilesh Yadav is yet to respond to his father’s suggestions. On the Independence Day, Akhilesh Yadav was scheduled to unfurl the national flag at the SP state office in the presence of his father .  However, Akhilesh skipped the event and instead went to his home town in Etawah district to celebrate Raksha Bandhan along with the family members.

Mulayam Singh Yadav unfurled the national flag at the SP state office in the absence of party president. Sources close to senior Yadav said here on Saturday that he was perturbed over the rapid erosion in the support base of the party following the collapse of the SP alliance with Bahujan Samaj Party after the recent Lok Sabha elections and exodus of Rajya Sabha members from the party.

A senior SP leader said, ‘Netaji is convinced that it is beyond the political acumen of Akhilesh to manage the party affairs and if the party has to be saved from going to oblivion, he must take over the reins’.

‘Netaji is particularly worried over the resignation of Neeraj Shekhar from the Rajya Sabha and his joining the Bharatiya Janata Party. The SP has lost the tall leader in Ballia district in eastern UP which is crucial for the electoral fortunes of the party’, the SP leader said.  Akhilesh Yadav, the then chief minister of UP, had toppled his father from the office of party president in January 2017. Akhilesh, with the active support of his uncle Ram Gopal Yadav, on January 1, 2017 convened a meeting of the SP national executive and got himself elected as party president.

Also, he had retaliated against his father’s move to expel him from the party. Mulayam Singh Yadav had then termed all decisions taken at the national executive as illegal and unconstitutional, saying the meeting was convened without his permission.

The fight for supremacy in the first family of the SP broke out in the midst of UP Assembly elections in 2017 and reached the Election Commission. After hearing both the parties, the poll panel upheld the decision of the national executive of the SP electing Akhilesh Yadav as party president. Mulayam’s claim to the party and the party symbol was also rejected by the Election Commission.

Sources in the party said it was highly unlikely that Akhilesh Yadav would accept the demand of his father.  ‘Ever since taking over the party in January 2017, Akhilesh has been working singularly for cleansing the party of leaders owing allegiance to his father and uncle Shivpal Singh Yadav. The three Rajya Sabha members who recently resigned from the party were from the Mulayam camp so Akhilesh never cared for them. For him it was a good omen that they left the party on their own volition,’ an SP leader said.