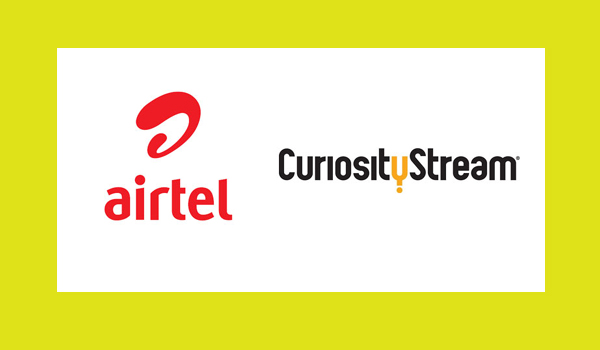 CuriosityStream lets viewers explore their passions and discover new ones with thousands of films and series covering space, art, volcanoes, history, travel, cars, architecture, dinosaurs and so much more.The complete content catalogue of CuriosityStream, including exclusive originals that can’t be seen anywhere else, will now be available to Airtel customers on its converged digital entertainment platform – Airtel Xstream.

CuriosityStream covers the full breadth and depth of the non-fiction genre – from science and technology to history and nature to society and lifestyle – with titles including: The Emmy Award-winning Stephen Hawking’s Favorite Places Butterfly Effect: Gandhi-The Force of Willpower The Emmy and BAFTA-nominated David Attenborough’s Light on Earth Asia’s Monarchies: Nepal Age of Big Cats

And CuriosityStream’s newest ongoing original series, Bright Now, designed for on-the-go viewers in today’s fast-paced, modern age. With this latest partnership, Airtel has further strengthened its digital entertainment play. The Airtel Xstream platform offers over 10,000 movies and shows along with 400 plus LIVE channels. This content can be accessed across all screens – smartphone, TV, and PC through Xstream applications and smart devices.

Adarsh Nair, Chief Product Officer, Bharti Airtel said: “We are thrilled to join hands with CuriosityStream to introduce India to best-in-class factual entertainment content, which will be available to customers on the screen of their choice. There is growing demand in India for quality content and we believe that CuriosityStream’s award winning series will add to our effort of delivering a differentiated experience to our customers.”

Sunil Taldar, CEO and Director – DTH, Bharti Airtel said, “We are delighted to partner with CuriosityStream for our Airtel Xstream platform and bring some really exciting and premium content to Indian homes. With the new Airtel Xstream Hybrid Box, customers can enjoy the best of linear TV and online content, including exclusive factual shows commissioned by CuriosityStream.”

Clint Stinchcomb, President and CEO, CuriosityStream said, “CuriosityStream is the definitive experience for satisfying curiosity and supercharging the imagination. Our partnership with Airtel is built for today and for the future, reaching the important Indian audience at scale through Airtel’s vast footprint and multiple screens. We are excited to team with Airtel for this first-of-a-kind partnership.” The Airtel CuriosityStream partnership was secured by media distribution firm Brandwith.