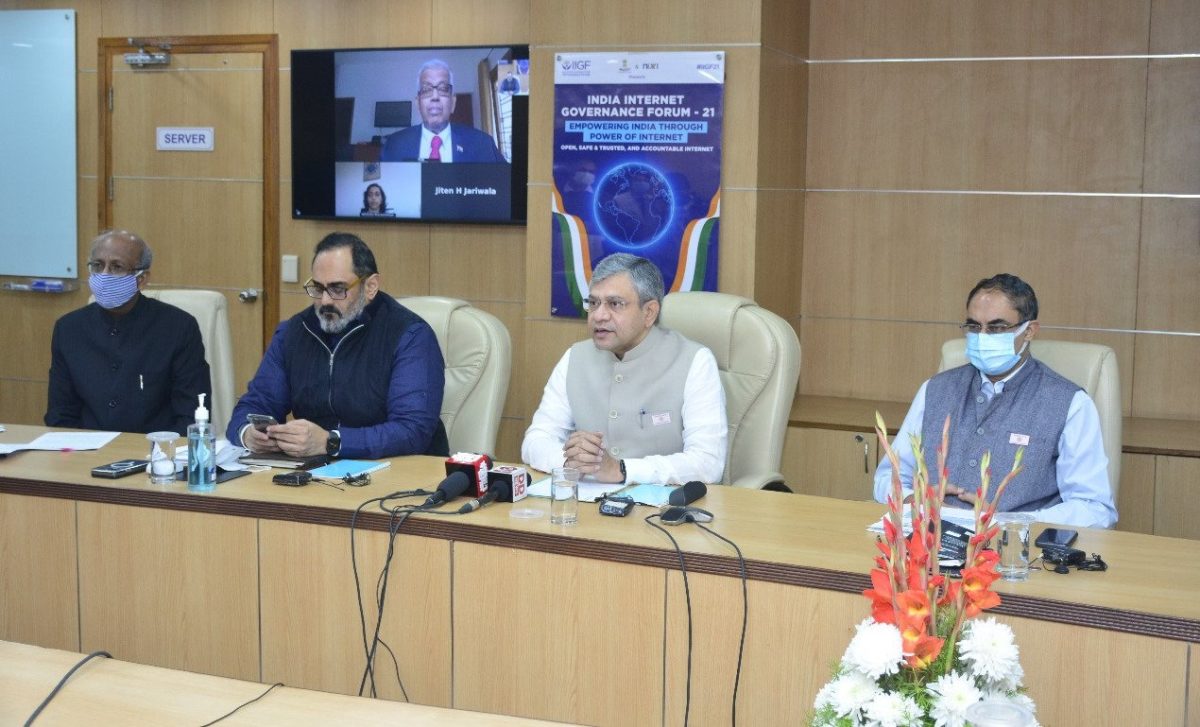 New Delhi: Ashwini Vaishnaw, Minister of Electronics & Information Technology, today inaugurated India Internet Governance Forum 2021 (IIGF 2021), a 3-day online event on internet governance, which is jointly being organized by the Ministry of Electronics and Information Technology (MeitY) and the National Internet Exchange of India (NIXI). The event which is centered around the theme “Empowering India through Power of Internet”, is bringing stakeholders of internet governance together to discuss the roadmap for digitization and reaffirm India as an essential participant globally.

Speaking on the inaugural event, Ashwini Vaishnaw, IT Minister said,” Internet is the most important part of economy and society and it is crucial to define its norms of governance. We have to bridge the digital divide with a focus on marginalized living in the remotest part of the country. It is also important to decide the ownership of the content shared online. Young minds are easily tempted to believe in what is shared online especially on social media and there is a need to decide responsibilities. It is also crucial to see the social impact of online disruption.

Today, e-commerce has disrupted small businesses and that has a social impact. We have to work to bring smaller individuals to the mainstream. Cybersecurity requires maximum attention. Entire systems can be taken for ransom or can be held hostage. Can we develop a robust system for cybersecurity? I hope this forum will bring solid answers to these questions.”

Rajeev Chandrasekhar, Minister of State (MeitY) said, “One of the largest connected countries is hosting the first IIGF and this has been long due. The government is committed to make the internet open, safe & trusted, and accountable to all. It must also remain free from the influences of both government as well as big businesses and this is an article of faith for the Narendra Modi Government.

We would soon have a billion Indians—women, children, elderly and others connected online and availing government services, subsidies, etc. The future of IIGF is to shepherd and work with government bodies to ensure that future jurisprudence on the internet is developed by bringing users on board as the most important stakeholders. The future of global internet should be led by India’s internet ecosystem and innovation capabilities.”

The digital drive in India is in full swing to bring 100% of the population on the internet network and the event is focusing on the digitization roadmap, opportunities, possibilities, and challenges in India. Through an open and inclusive process, IIGF is bringing together all stakeholders in the global internet governance ecosystem including government, industry, civil society, academia – as equal participants of the larger internet governance discourse.

“Internet has become an intrinsic part of our lives and we use it to learn, communicate, and find opportunities. Handling such a complex ecosystem requires governance and IIGF has taken the lead. All stakeholders should join together to anticipate what is going to happen in the coming years and find solutions together. India has strongly supported multi-stakeholders, and it is also very important that we value the internet as an open, accountable, and safe space,” said Ajay Prakash Sawhney, Secretary (MeitY).

“All Indians have been waiting for the India chapter of the IGF for a long time which was constituted by the United Nations in the year 2006. With 1.3 billion Indians online, the country can become the leader of the global internet. India has been a champion of multi-stake holderism on the internet. We are thankful to all the luminaries present at the IIGF for sharing their ideas. We will bring out a white paper so that it guides the IIGF and the global internet governance,” said Anil Kumar Jain, CEO NIXI.

TV Ramachandran, President, Broadband India Forum & Vice-chair, IIGF 2021 delivered the vote of thanks at the end of the inaugural ceremony.