At Least 23 People Killed in protests since start of Bolivia political crisis : OAS 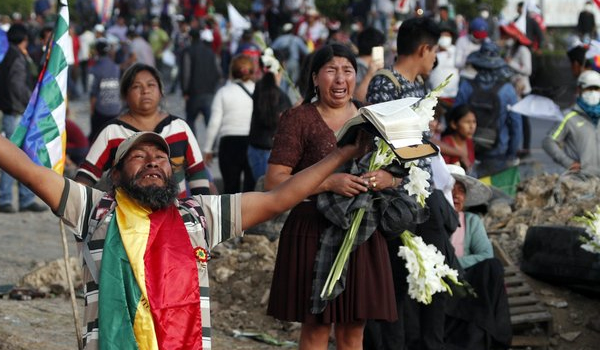 Moscow, Nov 17 (Sputnik) Protests in Bolivia have left at least 23 people killed and over 700 injured since the start of the political crisis in the country, according to the Inter-American Commission on Human Rights of the Organization of American States (OAS).
“The Inter-American Commission on Human Rights updates the death toll in Bolivia: since yesterday, nine people have been killed and 122 have been injured as a result of repression of police and the armed forces. In total, at least 23 people have been killed and 715 injured since the beginning of the institutional and political crisis,” the Washington-based commission wrote on Twitter on Saturday.

Bolivia plunged into crisis following the October 20 presidential election, which saw then-President Evo Morales secure his fourth term in the first round. The opposition refused to accept the vote results, citing alleged irregularities in the vote-counting process, which was subsequently confirmed by the OAS.

On November 10, the Bolivian armed forces urged Morales to step down for the sake of the country’s stability. As a result, he resigned the same day and left the country. Bolivia’s highest-ranking officials resigned as well. On Tuesday, Jeanine Anez, the opposition vice speaker of the upper house, declared herself the country’s interim president. The Bolivian Constitutional Court recognized her claim as legitimate.
Morales departure, however, did not help to stabilise the situation. On Friday, coca farmers supporting the former president took to the streets of the central department of Cochabamba to protest against interim president Anez. The ensued clashes between the protesters and security officers claimed nine lives. Morales has condemned the events in Cochabamba as “carnage.”