Battered BJP requires change in its political mascot of Modi-Shah! 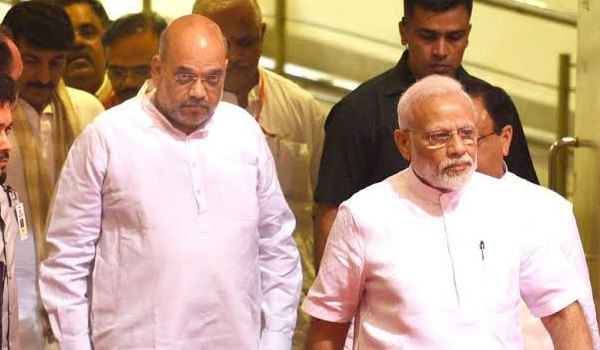 With a slew of issues like NRC and Citizens Amendment Bill (CAB) suffering hiccups in some parts of the country, it would be not that easy for the NDA to steer out of the odds. And there had been a few questions over the tenor with which the union home minister and the BJP national president spews venom the angst at the opposition, there are enough risks that the political think-tank(Shah) seems running with.

In the present political scenario, first it was Maharashtra where the BJP was seen as  the most embarrassed one when ideologies in politics were seen  flung around like a badminton shuffle cork  in which both the Shiv Sena and the BJP were guilty. Whether Sena broke out of its Hindutva aura to see a fortune in the secular Congress or, BJP did go for a dramatic political coup with Ajit Pawar of NCP  as its saviour for a night, it is all the same.

A missing link in saffron chain

Somewhere, there was a missing link in the charisma of the duo, Narendra Modi-Amit Shah combine, forcing the BJP to sulk in Maharashtra.

The rising protest against the CAB is not that the BJP should be myopic about and what is equally important that the BJP cannot ignore the severe resistance that NRC faces in Assam to flush out the illegal immigrants. But the outcome from certain parleys shows that, Shah has foreseen the dangers and gone defensive on the North-Eastern states’ sentiments.

If seen in hind sight, West Bengal under the TMC, which once appeared a loose link of the anti-BJP bandwagon and  that the BJP would have made political capital out of, has not made it to a real success.

However, after few skirmishes in Bengal, it was the chief minister, Mamata Banerjee, who seemed to have realised about the follies in her verbal over-reaches and was paid the dividend in the recent by-polls by winning the three Assembly seats.

Notwithstanding the fact that, in recent general election there was a binary voting pattern by the voters and it is not known if the same pattern would prevail in Bengal and if so, Mamata has to hammer strongly on regional issues in which CAB & NRC would matter in her favour.

And, the economic slide has grown to be an issue that stares at the NDA and the Prime Minister Narendra Modi today finds himself in an unenviable situation leaving to his subordinates to do the damage control job with nothing much to advocate against the realities unfolding day in and day out.

Hardly had anyone imagined the amount of outrage post what the Industrialist-cum-politician Rahul Bajaj said on the fear factor under the NDA 2. Which has led to a spurt of debates at the national level and heart burnings within the saffron camp.

Slogans like ‘Beti Bachao, beti padhao’ seemingly falling flat and giving way to another national outrage after what happened to the Vet doctor in Hyderabad. A time has come when politicians and activists have pleaded in favour of  brutal punishments like ‘lynching’ for such culprits.

All said and done, the climate for the NDA has turned discernibly smoggy and the trust factor looking  eroded to an extent where, a change in the mascot of Modi-Shah requires a make-over.