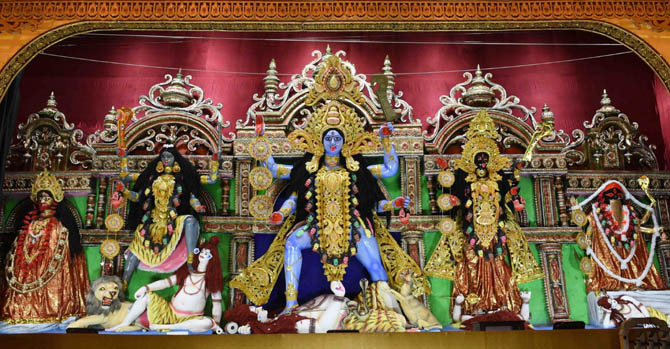 Like every year, this year too the West Bengal Government has put all arrangements in place for a peaceful Kali Puja. The Supreme Court had passed an order that allowed firecrackers to be burnt only from 8 pm to 10 pm, and that too those that do not cross the sound limit of 90 decibels. The West Bengal Pollution Control Board (WBPCB) and the police will see to it that these orders are strictly followed.

The Environment Protection (EP) Act provides for a maximum punishment of five years’ prison term and fine to the extent of Rs 1 lakh against violators. Senior officials of WBPCB and Kolkata Police have also held a meeting in this regard with the associations of various apartments in the city. Kolkata Police has urged people to buy crackers from the temporary Baji Bazaars. Five will be set up in Kolkata and three in Howrah. The WBPCB will also upload a list of permissible crackers on their Paribesh app, while the police will distribute leaflets in their respective jurisdictional areas so that people have a clear idea of the crackers that have passed the sound test standards.

There will be more than 3,000 Kali Pujas in Kolkata and its suburbs. The police and the administration are leaving no stone unturned to make it a happy occasion for everybody concerned. There will be special police arrangements in certain places and police pickets at more than 600 spots. The police will continuously move around in cars and motorbikes to see to it that there will be no disorder. They will also use auto-rickshaws for the purpose, to get to places which cannot be accessed by police jeeps. There will also be heavy-duty flying squads and radio flying squads, along with quick response teams (QRT).

For more effective firefighting, the Fire and Emergency Services Department will deploy four motorcycles mounted with basic firefighting infrastructure for each fire station headquarters in the state, on the day of Kali Puja and the following day. The department has 144 fire stations in buildings of their own and two in temporary structures. Mobile fire stations will be set up in Tiljala, Topsia, Tangra, Tollygunge, Bhowanipore, Behala, Amherst Street and Bowbazar in Kolkata, Chapadali in Barasat, Naihati, Bantra in Howrah and some other places.

The department will also set up 18 stalls at 18 pandals, selected based on the number of people they attract, combining Kolkata and the districts, for creating awareness about fire safety and security. Thirty-four ghats have been identified for immersion. These would be manned by police personnel and would have CCTV arrangements. Watchtowers too will be there for security.

Disaster management teams of Kolkata Police will be placed at several ghats. There will be river traffic rescue teams at every ghat. Last but not the least there will be police pickets at around 250 spots along various immersion routes. (UNI)