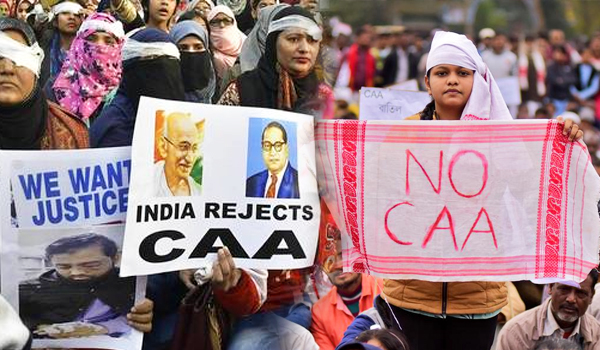 It is much more than what is seen as defensive ferocity in politics. The issue in question is the CAA now that seems to have taken out a lot of steam of the political dispensation at the Centre.

A time has come, regardless of the fact the CAA has been already into force, the prime minister and the home minister, both are seen playing the CAA card at every election meeting, making it look like not an act, but, as if, a commodity that requires an aggressive marketing by  the two top leaders.

Not once but, many a times, the duo has screamed hard to say, that the CAA hides no ambiguity and it has nothing to do with the people living in India, and the same gets echoed through several mediums that the Act is nowhere near any alleged hypocrisy or taken as a disguise to usher in NRC.

So, then what makes it so compelling for the Bharatiya Janata Party to push for a repeat of it time and gain.

If not hypocrisy, then has it anything to do with the atmosphere of protest coming from the students from several educational institutions that has got mired in a confusion of a lack of political & media logic?

Arrogance should be shunned

There is scope for skepticism when media and the political fraternity play different roles. But, on the current issue, that has agitated the youth psyche across, except few, rest of the mainstream media sounds unequivocally leaned in favour of the government.

Moreover, from last Friday, the functional structure of the Act has come into force with some non-Muslim citizens getting citizenship after the gazette notification by the centre on CAA.

And that should bring a stop to the campaign over CAA in political campaigns in either Delhi or West Bengal.

In fact, what is apparent that the difference of understanding, as it appears now, has become more than the conflict itself.

What was the need of the mention of the NRC at several occasions and the tenor with which it was spoken. Even on the CAA, that being an Act passed by the parliament, not necessarily mean that the men out there in the country would not speak if there is anything he or she feels unhappy with.

The biggest divide between acceptance and dissent is the arrogance by the people in power who think that, just a brute majority empowers them with an epistemological privilege to silence dissent.