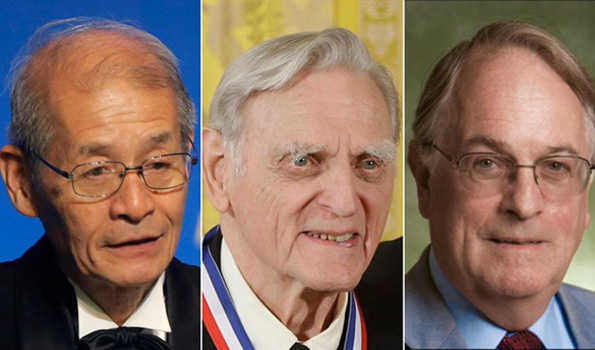 Scientists John Goodenough, Stanley Whittingham and Akira Yoshino on Wednesday won the 2019 Nobel Prize for Chemistry for the development of lithium-ion batteries.

‘This lightweight, rechargeable and powerful battery is now used in everything from mobile phones to laptops and electric vehicles,’ the Royal Swedish Academy of Sciences said in a statement while awarding the 9 million Swedish crown ($906,000) prize.
Goodenough, 97, is the oldest person to get the Nobel prize. Last year Arthur Ashkin (at 96) was the oldest. The three laureates each played a critical role in the development of lithium ion batteries.

In the early 1970s, Stanley Whittingham used lithium’s enormous drive to release its outer electron when he developed the first functional lithium battery.  Whittingham, an English–American chemist, is currently a professor of chemistry at Binghamton University, part of the State University of New York.

John Goodenough doubled the lithium battery’s potential, creating the right conditions for a vastly more powerful and useful battery. Goodenough, an American physicist, is currently a professor at The University of Texas in Austin.

Akira Yoshino succeeded in eliminating pure lithium from the battery, instead basing it wholly on lithium ions, which are safer than pure lithium. This made the battery workable in practice.

Yoshino, a Japanese chemist is a professor of Meijo University. “Lithium ion batteries have revolutionised our lives and are used in everything from mobile phones to laptops and electric vehicles,” tweeted the committee.

“Through their work, this year’s Chemistry Laureates have laid the foundation of a wireless, fossil fuel-free society,” it added. Their development was also a key in allowing to move away from fossil fuels, as the batteries enabled the storage of energy from solar, wind and other renewable sources. (UNI)