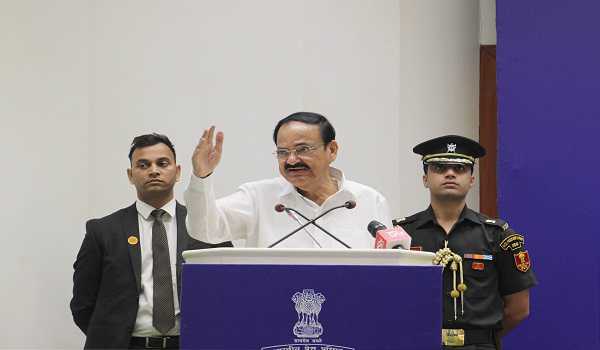 ‘ Sensationalism has become order of the day. Sensational news means senseless news,’ the Vice-President said after presenting awards to winners of the National Awards for Excellence in Journalism 2019 on the occasion of National Press Day .

‘With Business groups, political parties and personalities setting up TV channels and newspapers to further their interests, core values of journalism are getting eroded,’   Naidu said at the function, where he presented the awards along with Information and broadcasting Minister Prakash Javadekar.

Chairman of the Press Council of India (PCI) Justice Chandramauli Kumar Prasad was also present on the occasion.

‘Now news and views are being clubbed together, that is the problem,’  Naidu said.

The Vice-President said reading any one major newspaper in the past used to give a fairly good understanding of what was happening around the country and the world.

‘But it’s not the case now. One will have to read a minimum of four to five major newspapers to get a complete sense of the current developments.’

‘Gandhi Ji had once said about newspapers- One of the objects of a newspaper is to understand popular feeling and to give expression to it; another is to arouse among the people certain desirable sentiments; and the third is fearlessly to expose popular defect,’  Naidu said.

He said the cardinal principle of journalism is to present fair, objective, accurate and balanced information to the reader and viewer without journalists assuming the role of the gatekeepers.

Before addressing the gathering at the event,  Naidu and Information and broadcasting Minister Prakash Javadekar presented awards to winners of the National Awards for Excellence in Journalism 2019 on the occasion of National Press Day .

The selection of awardees were carried out by a Jury comprising eminent members of the Press Council of India (PCI).

On the occasion,   Naidu also released the Norms of Journalistic Conduct Edition -2019, the Directory of Press Council of India and the souvenir.