Cultivator to be disqualified for stubble burning on panchayat lands 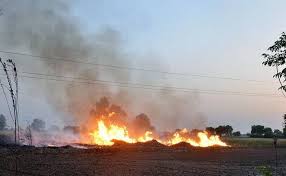 With a view to ensure a clean and pollution free environment in the state this winter, agriculture department has urged the rural and panchayats department to bar the farmers cultivating panchayat lands who indulge in stubble burning from taking land on lease in future, Agriculture Secretary said in Chandigarh on Sunday.

Secretary Agriculture Kahan Singh Pannu revealed that there were nearly 1.37 lac acres of Panchayati land under agriculture, where this unhealthy practice of open stubble burning could be averted effectively through coherent compliance of government orders issued under Air (Prevention & Control of Pollution) Act, 1981.

The Department has sent a communiqué to panchayats for issuing requisite directions in this regard so that farmers cultivating Panchayati lands can be apprised about the proposal, which may disqualify them from bidding process of these lands in next auction, in case they indulge in stubble burning after harvesting paddy.

Referring to celebration of 550th Prakash Purb of Sri Guru Nanak Dev ji in the state,  Pannu said that it was our bounden duty to keep Punjab’s environment safe and healthy on this pious occasion as millions of devotees from across the globe will be visiting the religious places associated with first Sikh Guru in different parts of the state. In reverence to this historic event, besides upholding the ideology of Guru Nanak to protect natural resources, the farmers should refrain from burning of paddy straw which poses serious threat to the environment, soil texture as well as human health, he added.

Emphasising the need to sensitise the farmers holding Panchayati lands against the ill-effects of crop residue burning, Pannu said that the Rural Development and Panchayats Department should launch a massive drive to persuade the farmers to abstain from this practice.

Pannu pointed out that the State Agriculture Department had already ordered to impound the combine harvester machines functioning without Super Straw Management System (SMS). He said that no harvester combine shall be allowed to harvest paddy in the State of Punjab without installation of Super Straw Management System which cuts the straw into small pieces, thereby helping the farmers to manage it without resorting to burning.  (UNI)