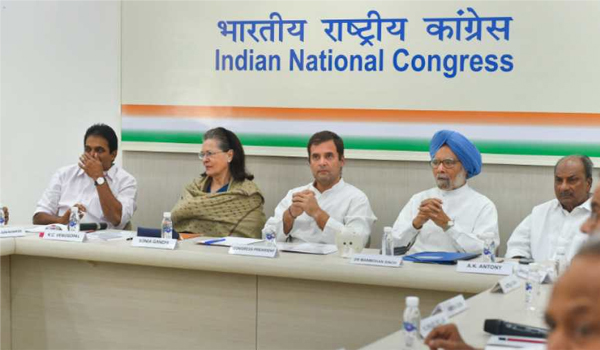 Amid dramatic uncertainties, the Congress Working Committee (CWC) on Saturday announced the formation of a panel which will decide on new party chief by evening.

The panel will consult Chief Ministers, state PCC chiefs, Legislative party leaders, general secretaries and other important functionaries and present the outcome before the CWC, which will meet again tonight.

“The meeting is over. Now we will meet at 2030 hrs and announce the name of next Congress president at 2100 hrs”, said party’s Lok Sabha leader Adhir Ranjan Chaudhary after the meeting of CWC, the party’s highest decision-making body.

Meanwhile, Congress Parliamentary Party leader Sonia Gandhi and outgoing president Rahul Gandhi left the meeting before it ended. Later, Gandhi clarified that they will not be a part of the consultation to choose the next president.

“Since deliberations for deciding next party president is going on, Rahul ji and me cannot be a part of it”, said  Gandhi.

The topmost on the agenda of the meeting, which started at 1100 hrs at the AICC headquarters at 24 Akbar road, is the selection of the new Congress president.

Ahead of the meeting attended by senior leaders of the party, including former Prime Minister Manmohan Singh, Leader of the opposition in the Rajya Sabha Ghulam Nabi Azad and senior leader A K Antony, names of several party leaders had been doing rounds as possible choice for the next president of the party.

These include senior leaders Mukul Wasnik, Sachin Pilot and Mallikarjun Kharge.
There are demands to choose party general secretary Priyanka Gandhi Vadra for the post, which was rejected by the Gandhi family. Over the past few weeks, several party leaders have favoured a young leader for the post.

These include Punjab Chief Minister Captain Amarinder Singh who said a young leader should head the party. Mumbai Congress chief Milind Deora suggested the name of party leaders Jyotiraditya Scindia and Sachin Pilot to take up the responsibility.

Given the fact that the public announcement by Rahul of his resignation last month had led to a confusion in the party on the leadership issue, party leaders have said that the issue of the party leadership be resolved at the earliest.