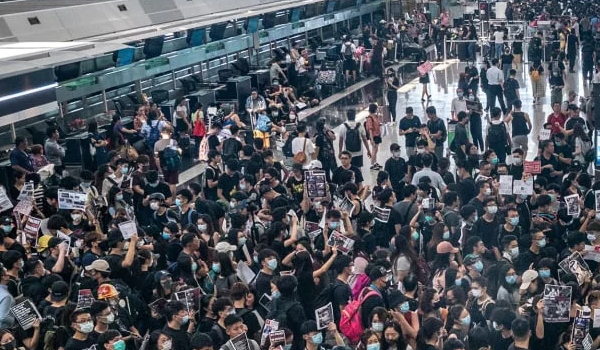 Ongoing protests in Hong Kong has set a new space for free thinking citizens that they can longer live in the shadow of undue surveillance of the ruling apparatus, whosoever it may be. They want to breathe free air and speak they feel strongly about. Today, Hong Kong is really on the boil. When there is a fierce clash between the administration trying to choke people’s voice and people are not ready to live under a shadow of vigil always.

In India, the climate is of mixed nature. On one side there are talks of a disturbing tranquil in Jammu & Kashmir after abrogation of the Article 370 and the government had it otherwise for all of us to believe. That is,  there is normalcy in many parts and normalcy is limping back in rest parts of the state.

An issue which has offered enough fodder for the media to arrange prime time debates and, sometimes, narratives or discourses spill out of the limits to further affect the social climate in J & K. If 370 is abrogated and it was an overdue as a step, then let things settle down themselves rather than aggravating the situation by exchange of harangues in television studios exacerbating the situation.

There are many other things those required to be looked into. Half of the country is in the grip of an unprecedented flood situation in which over 270 are reported to have been killed and the rest damage assessment would take time to be assessed in detail.

But, one thing is crystal clear that the political leaders here and outside must take some time to ponder over the looming threats of ‘climate change’ scaring to engulf us more severely than the tu-tu-me-me over religious divides or Hindu Muslim mud slinging .

Anyway, till the time the Independent Day issues are over, the focus is unlikely to be back on more paramount problems we face.

Reports also suggest that, in India, surveillance on the social media platform is going to be strict to filter any such spread of fake news or any inflammatory stuff creating panic or sense of unease  or  fan unrest by such messages. Seems people are not far from a noose of vigilantism and time may take us back to many years when there were no mobile phones !