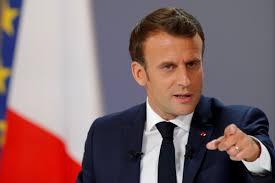 French President Emmanuel Macron called on his US counterpart, Donald Trump, during a phone conversation to assist in stopping the Turkish military operation in Syria’s north, the French president’s office said in a statement.

On Friday, Trump authorized new sanctions against Turkey for launching an incursion into northern Syria just days after critics blasted the US president for moving troops out of the area. A number of US lawmakers accused Trump of caving to Turkish

President Recep Tayyip Erdogan and betraying Washington’s Kurdish allies.
“[Macron] called on [Trump] to put an end to the Turkish operation [in Syria] as soon as possible. France and the United States will remain in close contact on the issue in the coming days,” the statement issued after the Friday phone conversation said.

Macron emphasized the importance of preventing new Islamic State terrorist group (IS, banned in Russia) cells from forming, following the extended international efforts to fight and contain the group over the past several years.

On Friday, the press service of the Syrian Democratic Forces (SDF) said that five IS militants had escaped from a prison in north Syria after it was targeted by Turkish forces.

On Wednesday, Turkey launched Operation Peace Spring in Syria’s north, hitting the predominantly-Kurdish SDF and the IS. Turkey justified its actions by claiming that the SDF is affiliated with the Kurdistan Workers’ Party, which Ankara designates as a terrorist organization. The operation has been condemned by Syria, most Arab nations and Western countries. (UNI)