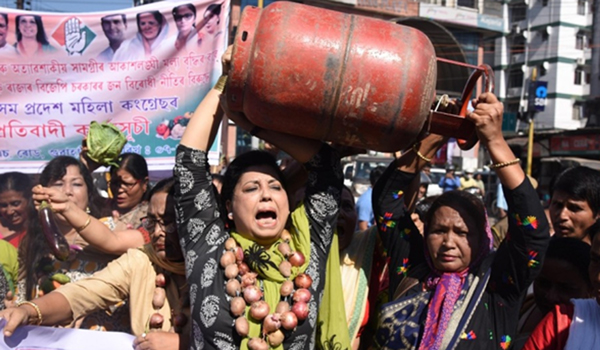 Onion, petrol, diesel and now LPG price hike; what kind of hypocrisy do we expect from the governments when the protests by the Congress on Thursday against LPG hike as an agenda to defame the Bharatiya Jatana Party before the Delhi elections due in February ?

Can there be anything more cynical to pretend that, the politics of the day is sincere. It means no voices can be raised.

On the issue of onion, it is unlikely that, the prices can ever be the same as it were earlier to be. It would be dubbed anti-national if some get down to say why the government is not yet able to arrest the unprecedented hike.

Some say, no problem, we do not eat onions. It is like a timeless hypocrisy that reveals the real colour of politics of today.

Are there any truth-tellers left in politics.

Few months back a minister of State in the NDA had done that saying, ‘the petrol pumps do not charge me anything’ but he had said, that he knows how things are slipping out of hand.

Be it the petrol or LPG, it is difficult for any man out there to stay normal without resigning himself to the reality than grudgingly embracing it.

After few days or months, onion may reduce to a secondary ingredient but, one cannot start eliminating its requirement. Which would, normally, play the stabilizer role to keep onion where it is today. All the politicians know that but, they will never be interested to get down to the bottom and know the cause.

So, it is better to accept the fact that hypocrisy is a part of politics and as a citizen one has to only differentiate between, what is more harmful hypocrisy and what is less damaging hypocrisy.

Assembly elections are in February and so, anyone trying to raise the LPG price hike issue is also dubbed as hypocrisy driven by politics.