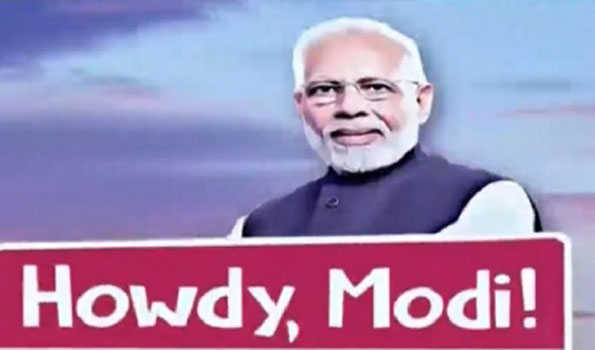 Notwithstanding the hype about ‘Howdy Modi’ rally at NRG Stadium, the Narendra Modi-Donald Trump bear hug, shake hands and walking hand-in-hand on Sunday could finally end up doing deal about grapes, cardiac stents, pork and almonds.

Apparently much progress has been made in the trade talks between two sides and a big ticket announcement is possibly on the cards. In the meantime, speculation is rife which among the two –  Modi or Mr Mr Trump would bargain hard and give in the maximum to the other side. The US is eyeing a pact on ethanol among other facets of commercial parleys as well.

The Modi government and Union Commerce Ministry want market access for grapes and some other farm products to export to the United States and in return may give in with lower tariffs on high-end American electronic products.

India has been the largest beneficiary of the US government’s special concession regime GSP, which was enforce since 1970s but the Trump administration earlier this year ended duty-free access for about USD 5.7 billion worth of Indian exports. These included chemicals, plastics, leather and rubber goods, and auto parts. India also responded with higher retaliatory tariffs on 28 US products, including almonds, apples and walnuts.

India is the second largest importer of US apples and the top buyer of US almonds, paying USD 543 million for more than half of US almond exports in 2018. The talks are thus focused on US keenness for reduction in agricultural tariffs by India including those for almonds, pork, dairy products, cherries and apples.

The US team led by Trade Representative Robert also wants the Modi government to remove high pricing barriers on imported medical devices including cardiac stents.
“…The trade problems are normal with people you are closest to since most trade happens with them,” External Affairs Minister Dr S Jaishankar has said in Delhi this week.

For his part, President Trump wants better terms of trade from most of the top commercial partners of the United States including India. Washington has thus also taken up with India’s the issue of new investment rules on e-commerce. The restrictions are said to have harmed the interest of companies like Amazon.com Inc and Walmart-backed Flipkart which are more than keen to tap the rapidly growing online market set to touch USD 200 billion by next 7-8 years.

Thus as the two quintessential ‘masters of ceremonies’ will take stage, mandarins and experts would be keeping fingers crossed for an early trade pact that will ensure that a powerful market of a combined population of world’s largest democracy and most powerful democracy will offer a win-win situation to both the countries.

“Prime Minister Modi will need to show something concrete when he returns to India after a week long tour which has already attracted bitter criticism from opposition Congress and the Left parties in the country,” says a BJP source. Besides attending ‘Howdy Modi’ event together, Prime Minister will have a bilateral with President Trump on September 24 in New York.

The bilateral meet between   Trump and  Modi will be fourth such engagement between the two leaders in last four months.