Heritage lost ! safety & security of temple is paramount,  but what plans afoot to utilize the space created, people must know 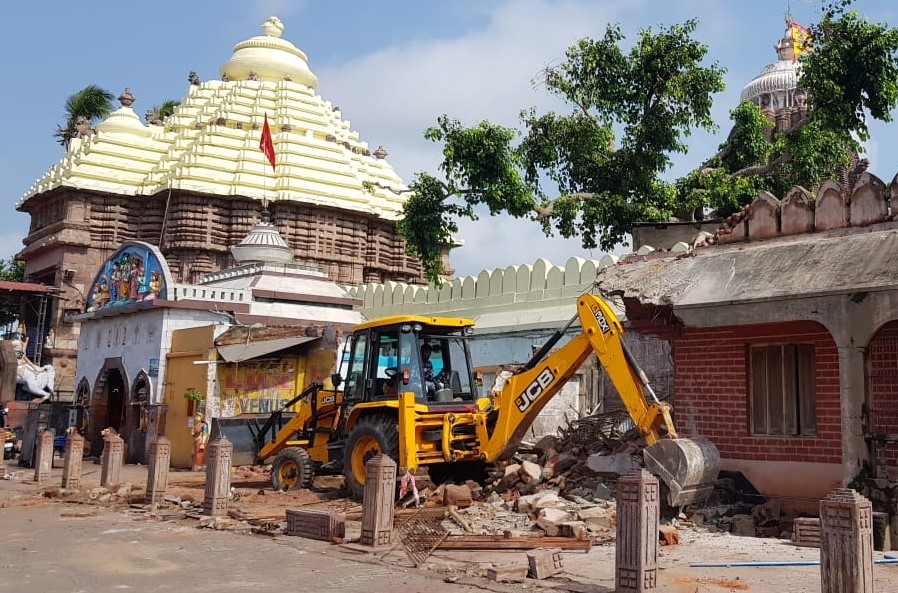 ‘Heritage ‘ in peril, is what appears to be the common refrain in Puri where rhe government has started razing down the centuries old ‘mutts’ in the sorroundings of the sacred temple of Lord Jagannath. The process, however, goes on amid cries of panic  among  the owners and thousands related to those structures.

Why so much of hullabaloo among the people and others who seem advocating for the word heritage is yet beyond the comprehension of people in general. Which naturally throws up the question, whether the step by the administration or the government in general was taken post any kind of discussion with the stake-holders or was just a step to go by the decision of keep the great shrine free of any structure within 75 metres from the temple.

That was or, is, still a murmur audible in this holy city. There are allegations that the demolition drive was ‘pre-empted’ and the administration had kept the owners of such structures informed about the action.

Leaving aside the issues like economic aspects like shops and other commercial things, many purists appear disappointed with the facts like, once epitomizing the cultural heritage of Puri, the raged ‘mutts’ or buildings enjoying even a shred of religious virtuousity linked to the tample of the Lord, have gone for ever and no ‘heritage’ can ever be restored even if such replicas are rebuilt at any alternative locations under the rehab policy that is yet to come out clear.

In nut shell, the argument over restoration of ‘heritage’ through alternative structures, as heard from the quarters like the INTACH or the government sounds bit shrill for now.

History and tales of those ‘mutts’ and other institutions dating back to pre or post 13th century, it is said, were not only waxing eloquent in religious rituals of the Lord but were the active citadels of ‘diksha’ rearing youngsters from their early days into good human beings keeping in with the traditions.

Going in to the micro details of the R & R guideline prepared for the affected people will be a cumbersome task to describe here but the circular from the administration has specific thrust on the safety and security of the shrine which remains to be the most essential reason behind the entire exercise leading to the demolitions.

The ‘mutts’ or other such institutions razed has surely brought an end to what the purists call as heritage harbingers and it is for the latter and the government to debate the veracity of the purists’ claims but they can never restored is for sure.

However, for the affected institutions or the ones those who were directly or indirectly linked with the mutts etc have a reason to worry. Heritage restored or not is different but for the ones who had revenue generating modules operating in these structures, like shops etc survival or livelihood is more important  than anything else.

There is a rising curiosity among the people in general that how the emptied space within 75 mtrs are going to be utilized. Will they be left vacant as a space for surveliance with creation of some gardens and greenery etc or it will be made available as a grazing ground yet again for things other than commercial in nature. That is the big fear.