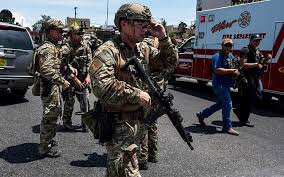 The Hong Kong government is not ruling out the possibility of having to introduce an Internet ban in a bid to curb violent protests, Ip Kwok-him, a member of the Executive Council of the local government, said on Monday.

Since early June, Hong Kong has been facing a wave of rallies against the now-withdrawn extradition bill — the protests have now evolved into violent anti-China and anti-police demonstrations. Police maintain that they use force only in response to violent actions on the part of the protesters. Beijing, meanwhile, views the situation in Hong Kong as a result of foreign interference in China’s domestic affairs and fully supports the actions of the local authorities.

“Currently, the government is considering all possible legal options to halt the violence, which couldn’t rule out an ‘internet ban’ in the future,” Ip told Commercial Radio Hong Kong.

On Saturday, in a bid to curb violence and make the actions of police more effective, the local government banned the wearing of face masks during rallies. The next day, thousands of demonstrators took to the streets to protest the new measure, with many defying the ban. (UNI)