Hrithik, Vaani burn up the dance floor in ‘Ghungroo’ 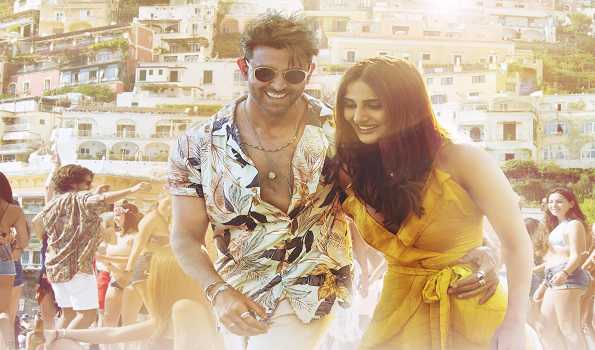 The party track of the year featuring the best dancer of India, Hrithik Roshan, and Vaani Kapoor is a groovy dance number that will surely be a chartbuster. Hrithik and Vaani will be seen scorching up the screen in this lavishly pictured number and their infectious chemistry is sure to be the highlight of ‘Ghungroo’.

Vaani has also proven her superb abilities to dance in her earlier films and in ‘Ghungroo’, she will be seen pushing her body to the hilt to pull off breath-taking and risky acrobatic choreography.

Vaani said,’Got to groove to the beats of #Ghungroo with one & only! Super stoked!@iHrithik #GundeLoThootluPade SONG OUT NOW’. YRF said,’It’s time to party, #Ghungroo todke! Song OUT NOW’.

‘Ghungroo’ has achieved a unique feat by being the first Hindi song ever to be shot at the luxurious Amalfi Coast. Composed by Vishal-Shekhar, Arijit Singh and Shilpa Rao have sung this out and out dance track. Fun and foot tapping, ‘Ghungroo’ is set to become the party anthem of this festive season.

‘War’ is a high-octane action entertainer that promises to be the biggest action spectacle of all times. It has two of the biggest action heroes of our country Hrithik Roshan and Tiger Shroff pitted against each other in a massive showdown.

Produced by YRF, the film is set to release in Hindi, Tamil, and Telugu on October 2. (UNI)