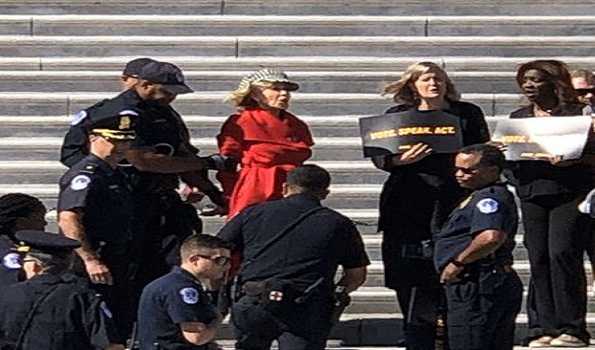 Eminent American actress and political activist, Jane Fonda, has been arrested for protesting climate change at the Capitol after citing Greta Thunberg as her inspiration.

WUSA9 reporter Mike Valerio shared videos of Fonda, in a checkered newsboy cap and red coat, being arrested on the steps of the Capitol Building.

Jane Fonda was protesting with over a dozen other people.

She was hauled in by police for protesting on Capitol Hill on Friday. The 81-year-old actress and political activist was demonstrating to demand the government take action to battle climate change.

All were charged with crowding, obstructing or incommoding. Fonda wants lawmakers take action to address the climate crisis, which she calls “an existential threat.”

“We have to be sure that the crisis that is climate change remains front and center like a ticking time bomb,” she told WUSA9. “We don’t have very much time, and it’s really urgent.”

Her focus will apparently shift every Friday, ranging from the Green New Deal to fresh water and forests. Fonda is living in Washington for nearly four months and plans to get arrested every Friday until she has to begin filming her Netflix show, Grace and Frankie, early next year.

“I’m going to take my body, which is kind of famous and popular right now because of the [television] series and I’m going to go to D.C. and I’m going to have a rally every Friday,” Fonda said in an interview with the Washington Post on Thursday.

The two-time Oscar winner said she was inspired by 16-year-old Swedish high school student and climate activist, Greta Thunberg. “It so traumatiszed her that she stopped speaking and eating,” Fonda explained. “And when I read that it rocked me, because I knew that Greta had seen the truth. And the urgency came into my DNA the way it hadn’t before.”

The 9 to 5 star, who is politically active on women’s issues as well, wants to educate people on various aspects of the climate crisis. She told the Washington Post that every Thursday evening, starting Oct. 17, climate scientists will participate in online teach-ins and discuss different aspects of global warming. Fonda said she would like to “draw connections” by discussing how violence against women increases in communities suffering from climate change.

Fonda has been making headlines for her political activism for decades. She was arrested in 1970 on her way to Fort Meade where she planned to hand out antiwar pamphlets to soldiers.

In 1972, she sparked controversy after posing on an antiaircraft gun in North Vietnam that would have been used to shoot down American planes. It earned her the nickname “Hanoi Jane.” She has repeatedly apologised for the photograph. The actress told the Los Angeles Times she thinks her show Grace and Frankie has made Americans more accepting of her political actions.

“Unlike [with] my earlier activism, I have a hit series at my back. It’s so much easier for me. People like me! I used to do this [in the Vietnam era], and chunks of my hair would literally be pulled out,” she said. “It really makes a difference to have a hit TV series, not a hit movie … Television is in your room all the time and so it really has an effect. And if they like your character and they like the story, then they like you.”

Fonda said she didn’t think Trump’s presidency would be this bad.

“When he became the nominee, I thought, well, that’s good, because he’s not ideological. You know, this will be easy. I did not expect it would be this bad. I didn’t,” she told the LA Times.

“I tried to get to [Trump] on the climate right afterwards,” Fonda added, noting how she called both Jared Kushner and Ivanka Trump, but they did “nothing.”