Indian web shows get set for the next level 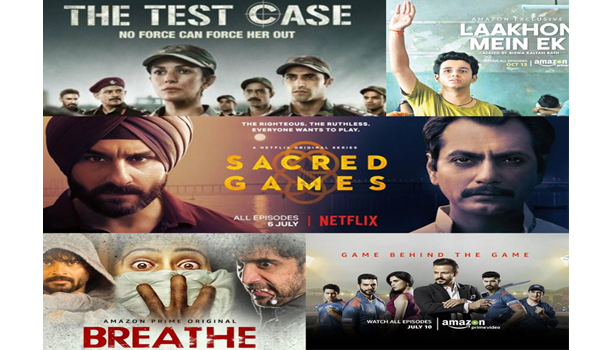 “Sacred Games”, starring Saif Ali Khan and Nawazuddin Siddiqui, was brought back by Netflix India this year owing to the huge success of season one. The crime thriller isn’t the only Indian web show that got renewed for a new season. There are other shows that have cleared the “acid test of content”, too.

The big question for all OTT shows returning with new seasons is: Will these taste the success of their first parts? Or, will these underwhelm, as the new season of “Sacred Games” did earlier this year?

Soon after “Sacred Games 2” premiered in August, it led to divided reactions among netizens. Many memes comparing both the seasons flooded the Internet. Those disappointed with the second season of the series went on to use images of old and torn clothes, broken cars, and stills from “Games Of Thrones” to express themselves.

Cricket-themed “Selection Day”, focusing on the stories of Radha and Manju, returned to Netflix in April. Some found it just “okay”, others thought the drama was inspiring.

Despite a few shows not living up to expectations in their new seasons as compared to original ones, follow-ups are happening in the OTT world aplenty.

Amazon Prime is also bringing back some of its hit shows — “Inside Edge” being one of them, and its actress Richa Chadha has promised her fans that the new season has a much more gripping and power-packed storyline.

“My character Zarina Malik has transformed very interestingly since the first season. In the first season, Zarina tried to do things in a rightful manner but she faced a lot of obstacles. Now she is questioning herself, as to why this is happening, why she is doing this, while it only puts her in trouble. The character goes into that tussle over going into the dark side of matters,” Richa had told IANS.

“Breathe 2” is another show the viewers are eagerly waiting for, not only because of its content but also because it will be actor Abhishek Bachchan’s foray into the digital space.

“Mirzapur 2”, starring Pankaj Tripathi and Ali Fazal, is expected to arrive in 2020. “Four More Shots Please 2” and Zoya Akhtar’s “Made in Heaven 2” have also been announced.

The trend of renewals can be seen on Ekta Kapoor’s ALTBalaji too.

“We believe that sequels (new seasons) are the acid test of the content. Sequels are made only when the content is successful and one has to create further pull and push on the sequel for it to be even more powerful than the first season,” an ALTBalaji spokesperson told IANS.

“We have around 50 original web series and the highest number of sequels for them so far, starting with the critically-acclaimed ‘Broken…But Beautiful’, on November 27, which depicted the journey of Veer and Sameera and their life of heartbreak.”

Another show on ALTBalaji, which has left behind a legacy is “Ragini MMS”.

“After the resounding success of the first season, we are now launching an even more intriguing second season that features the Internet sensation and audience’s favourite couple Varun Sood and Divya Agarwal. Adding to the hype and frenzy and ensuring we break the Internet, the franchise will have a special item number ‘Hello Ji!’ featuring none other than gorgeous Sunny Leone,” shared the spokesperson.

Other shows in the pipeline, which are set for a new season are “Kehne Ko Humsafar Hain season 3”, “Baarish 2”, “PuncchBeat 2” and “Gandii Baat Season 4”.

Speaking about the upcoming new seasons of their shows, the characters that “we have introduced through our shows have created a strong impression on viewers. We aim to build on this legacy while adding more interesting elements to keep them current and relevant,” said the ALTBalaji spokesperson.