It’s all about “The Absolutely True Adventures of Daydreamer Dev” 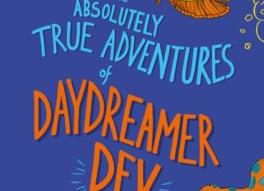 “The Absolutely True Adventures of Daydreamer Dev (Omnibus Edition)” by Ken Spillman is about the fantasies of “Daydreamer Dev” stepping into worlds where the totally incredible becomes totally credible.

Sitting in class or watching clouds from the roof of Kwality Carpets, Dev’s flights of fancy land him in challenging environments all over the globe.

He brings home notes from his teacher so regularly that Amma only rolls her eyes as she fishes them from his satchel. Baba says that if there were medals for daydreaming, Dev would be an All-India Champion-maybe even an Olympic hero.

These action-packed stories transport the reader to three iconic locations, each one testing Dev’s survival skills while teaching him to respect environments and cultures that seem alien to him.

Follow Dev as he accompanies the ghost of a Sherpa woman on a quest to conquer Mount Everest. Ride with Dev as he traces the Amazon River, which proves much more difficult than going with the flow!

Join Dev and his pal OP as they set out from Timbuktu to cross the Sahara on malodorous camels. For Dev and his colourful imagination, it’s Access All Areas and No Holds Barred. ” Dev is funny, lovable and someone most children can identify with, ” according to Telegraph.

” Read the fantasies of Daydreamer Dev as he steps into worlds where the totally incredible becomes totally credible, ” Goodreads.

Ken Spillman developed his imagination while playing games in bushland on the edge of one of Australia’s most isolated cities, and by reading adventures set in faraway places.

He is now the author of around 80 books, published in around 20 languages. Ken is a frequent visitor to India and has written a number of books featuring sharp-witted young Indian characters.