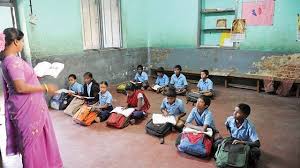 Nothing can be more disappointing, at a time India gears up for a 5 Trillion economy, a tag of ‘ learning poverty’ haunting over fifty per cent of children in India, is a very uncomfortable tag to accept.

But that is what a report by the  World Bank (WB) report says that, about 55 per cent children in India ‘cannot read age-appropriate text by age ten’. If true then, it is not only baffling as a statistics but, according to the claim in India, is not in congruity with the reality at the bottom.

So, the best way to ward off the stings of any such report, the government at the Centre chooses not to give as much significance to the  WB report and feels, that, it required a more detailed empirical survey.

So, in the on-going session of the parliament, issues like Ayodhya, Maha politics, J & K, NRC,  or the farm-sector distress can sweep away the issue of ‘learning poverty’ for the time being. Rather, a section in the NDA has disapproved the authenticity of the WB report, indirectly, counter-claiming that the target  at taking every child to the school has been achieved.

It can leave many wonder if that logic is sound one in the light of the inadequacies in the learning quality of the children. There must be some flaw, somewhere in between and there is no rationale behind running away from the reality .

NDA has sported a statistics to mitigate the claims by the WB saying that, in 2018, as per the Annual Status of Education Report (rural) , that 50.3 per cent of class 5 children in rural India could read a class 2-level text.

There is no denying the fact that education and economy are not only correlated but the end result is that, in countries like South Korea and China have reaped great benefits of a good learning initiative by the governments there leading to tremendous dividends for the economies respectively.

Indian government cannot ignore the Planning Commission’s findings in 2012 where it was found that, ‘ there was a problem with the learning system’.

In contrast, there has been good strides in other countries at mitigating poverty through a serious effort invested into making education for children healthier one.

If education serves itself like a mental diet then the ‘ government must realise that, giving food is different than giving a good diet ‘ said an educationist.

That way, it is a multi-pronged problem when a child is not able to make it to an ‘age-appropriate text reading’ then the entire effort gets lost as useless so, the child must have the grasp the subject. Which is not happening according to the report.