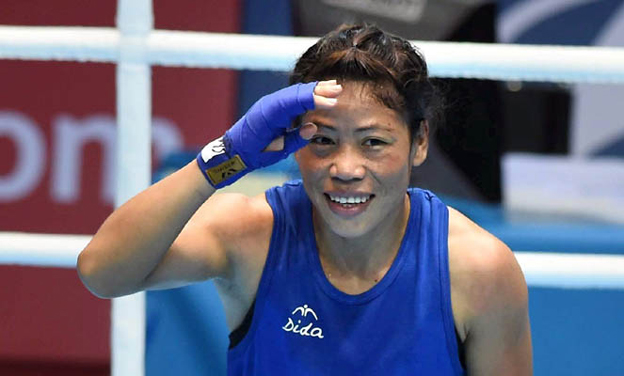 New Delhi, Dec 28: Six-time world champion Mary Kom on Saturday booked a place for herself in the Indian team that will travel to China in February for the Olympic qualifiers.

Mary Kom beat Nikhat Zareen in the final of the 51 kg weight category event by a split decision (9-1) in a highly anticipated bout at the Indira Gandhi Indoor Stadium in the national capital. The match was followed by heated protests from the officials of the Telangana Boxing Council.

The Council’s assistant secretary, A.S. Reddy, who was among those incensed by the decision, later said that they will launch an official protest with the International Boxing Association through the Telangana Sports Ministry. “Nikhat was the clear winner. Mary Kom was given the bout because of her seniority and because she is a Rajya Sabha MP,” he told reporters.

Saturdau’s match was a culmination of months of buildup which started with Nikhat not being given a chance to stake a claim in the Indian contingent that went to the Women’s Boxing World championships earlier in the year.

Nikhat had after the Women’s Boxing World Championships in November demanded a trial to decide who between her and Mary Kom will go after it looked like the latter may travel to China for the Asia/Oceania Olympic qualifiers in February 2020 due to the Boxing Federation of India’s indecision over the selection policy. She had also demanded that the trials be telecast live which the BFI rejected stating that there is no precedence for it.

While Mary always stated that she would abide by whatever selection policy the BFI has, she had indicated an aversion to a trial, taking the example of other sports in which athletes don’t have to give trials. “Even in other games like badminton, who gives trial? Have you seen Saina Nehwal and P.V. Sindhu appearing for trials? But in our case it is different,” she had said in August.