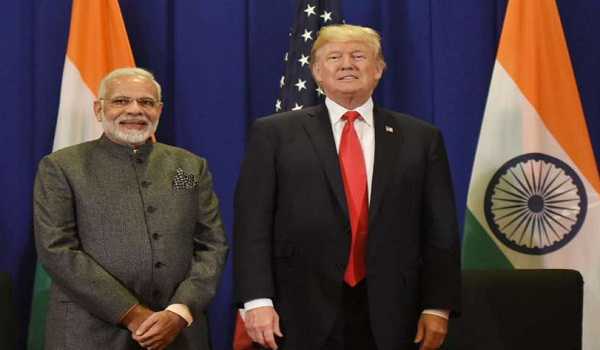 All eyes are on bilateral meeting between Prime Minister Narendra Modi and US President Donald Trump to be held on Tuesday here.

This will be second meeting between Prime Minister and   Trump within span of two days and fourth bilateral in last four months. The political content of the Tuesday’s bilateral engagement has increased manifold after the US President yet again ‘revived’ his keenness to mediate between New Delhi and Islamabad on Kashmir – an offer summarily rejected by India in the past.

Indian officials have skirted any direct reply on  Trump’s repeated offer to mediate between New Delhi and Islamabad. “I think there is a meeting tomorrow between Prime Minister Narendra Modi and US President, so let us wait for the meeting,” Secretary West in the Ministry of External Affairs A. Gitesh Sarma told reporters here.

Answering questions on the same, MEA spokesman Raveesh Kumar said – “You see, the Secretary (Mr Sarma’s) response is after giving some thought. You are aware of our position, we have mentioned about this in the past. But my request is just hold on; just hold on for the meeting tomorrow. I think it is not far and we do intend to immediately hold a briefing after that where all the queries which you have on the topic will be answered”.

A day after his meeting with Prime Minister Modi at Houston grand show and walk hand-in-hand; President Trump sprang a surprise on Monday when he said – “If I can help, I will certainly help. If both (Pakistan and India) want, I am ready to do it (mediate)”.

Significantly, there was a standing ovation at Houston during the ‘Howdy Modi’ show after Prime Minister Modi had said that   Trump is firmly behind India in its fight against terror menace. ‘I would like to emphasise that President Trump is firmly with us in this fight,”   Modi has said in front of 50,000 strong Indian Americans and had urged the gathering to give a standing ovation to the President for his pledge to fight terror.

Without naming Pakistan,  Modi has said, ‘Some people have made it a habit to pursue hatred against India as the nucleus of their politics.’ The Prime Minister also had lashed out at Pakistan for pursuing a policy of hatred against India while President Trump has said – ‘We are committed to protecting innocent civilians from the threat of radical Islamic terrorism’.

Trump’s remarks too drew a 50,000 strong capacity crowd of Indian Americans and US lawmakers stand up in approval. ‘There are the same people who thrive in violence and trouble and are sponsors of terrorism…They nurture terrorism and the entire world knows their identity,’ the Prime Minister said amid strong applause from the crowd which has gathered for a rare historic occasion.

‘Time has come to fight terrorism and also take decisive steps against those who support terrorism,’  Modi has said obviously trying to build a pressure on the US leadership.

On Monday, at the Leaders’ Dialogue on Strategic Responses to Terrorist and Violent Extremist Narratives at the United Nations headquarters here, Mr Modi has mounted pressure on global players and the world body UN not to distinguish between bad terrorism and good terrorism and said there is need to ensure that terrorists “should not be allowed” to get funds and arms.

“For this objective to be realised, we need to avoid politicisation of mechanisms like UN listing and FATF. These mechanisms need to be enforced and strengthened,” Mr Modi has said.  Modi also said, “a terrorist attack anywhere is the world should be considered terrorism. Not good or bad terrorism”.

The Prime Minister also called for ‘qualitative upgradation’ in the ongoing cooperation and intelligence sharing under bilateral and regional framework. (UNI)