Muzzling freedom of expression, the Bhopal way, leads us to behind the time orthodoxies 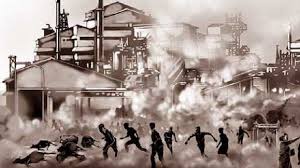 Going through an article, which appeared in an English daily , The Deccan Chronicle, it brings to fore the bare fact that, importance that requires to be given to freedom of expression, still remains stunted, in many ways.

To create a fair analysis on an incident in which there is nothing to hide, is anybody’s right in an egalitarian society.

Be it a film or documentary used as a throwback or otherwise to inform people about an incident that had rocked the nerves of millions in Bhopal, in India and world over, it must get its due dissemination .

Titled as ‘ Sheeshon Ka Messiah’ (Messia of Glass) is a documentary film by Muzaffar Ali, which vividly portrays the horrifying aftermath of the Bhopal gas tragedy that killed over fifteen thousands and rendered generations impaired by the cyclic impacts. An incident caused by neglect and dealt with an apathy to enter the records as one of the worst industrial tragedies in the world.

The film, which Ali had made, more than three decades back,  with the backing of the state government’s Information wing, as an effort to take the viewer down the memory lane to say what happened in 1984, is still kept out of the public domain for reasons unknown.

It is all about telling a truth and not fueling anything that can trigger a riot or something like that. Is it that the state government had any political discomfiture or it was a sluggish opinion making media apparatus which helped the film ‘Sheeshon Ka Messiah’  to remain within the cans only ?

What is apparent that, the present political system is getting used to a practice that, a slew of ideals or idiocies dished out to the people , the latter should only take it with an enduring silence, without a question whatsoever. It is all about mutual convenience the governments expect the people to agree to.

It is a kind of out-dated mind-set dipped in an orthodoxy  that forbids anything negative. If the message travels beyond the zone of convenience of the state, those can be muzzled by any available effectiveness to ward off further damage.

But, 33 years is too long a period to harbor such an archaic instinct and shelve a truth that still haunts many. It is genuinely an ill-conceived notion gets nourished in the power corridors.

(By an arrangement with The Deccan Chronicle bureau, Bhopal )