National Games Round Up: Hashika claims fourth gold in swimming 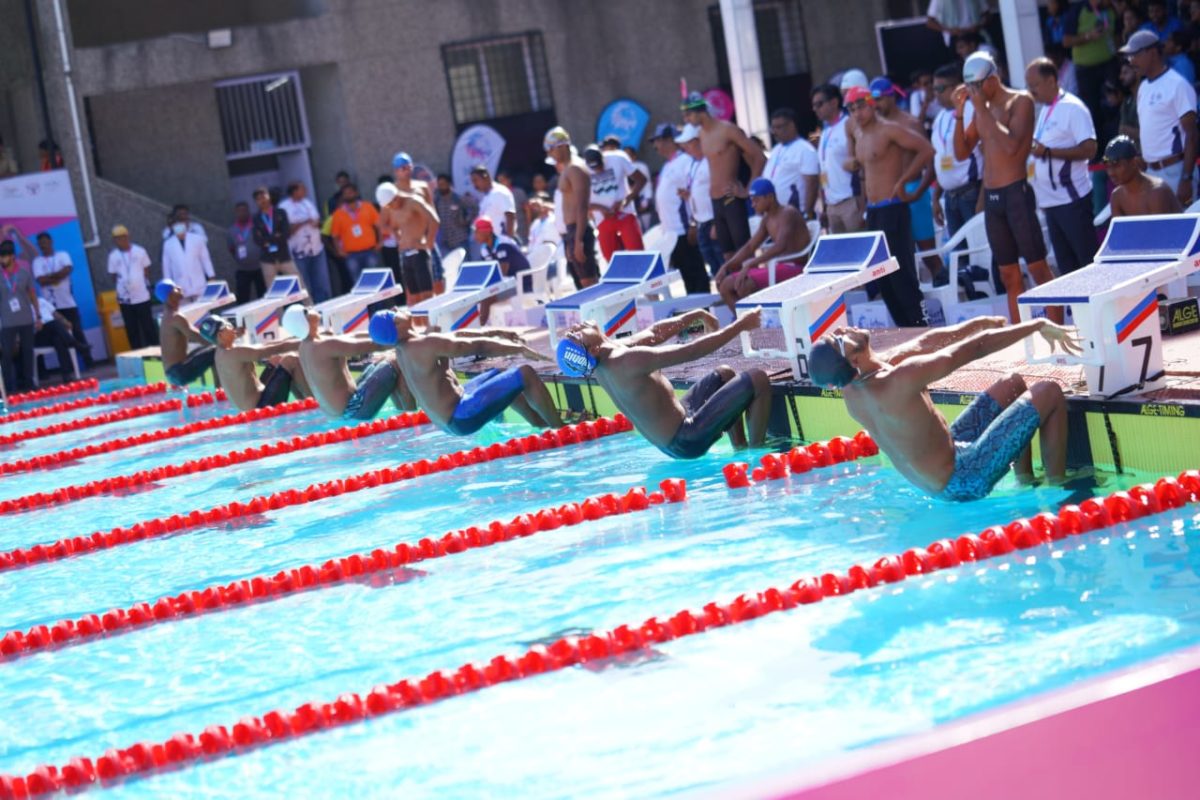 New Delhi: Hashika Ramachandra anchored the Karnataka 4x200m Freestyle Relay team to victory to climb the podium at the Sardar Patel Aquatics Complex in Rajkot for the fourth time in the 36th National Games but it was her stunning victory in the 200m Butterfly final that set the venue alight.

The 14-year-old Hashika Ramachandra dug deep into the reserves of her energy to slip past Astha Choudhury and touch the wall in 2 minutes 19.12 seconds for her third National Games record, including one as part of the Relay team, in four days.

The win enabled her to complete an individual treble to overshadow Maharashtra diver Hrutika Shriram, a mother of a two-year-old, and seasoned Sajan Prakash’s efforts today.

Favourite Hrutika Shriram stayed on course to repeat the golden hat-trick by winning the Women’s 10m Platform event. Though she was self-admittedly not at her best, she did her dives well enough to pick up her second gold in three days and her 10th crown in four editions of the National Games.

Sajan Prakash, braving an abdominal muscle pain, stamped his commanding presence by winning his favourite event, the Men’s 200m Butterfly with a National Games record. It was a praiseworthy bid by the experienced swimmer to claim his second gold medal of the National Games in addition to two silver medals.

Meanwhile, with 40 gold and 89 medals in all at the time of writing, Services continued to enjoy an unchallenged run at the top of the medal charts. Haryana were second with 25 gold, barely ahead of Maharashtra’s 24. As many as 25 teams have won at least one gold, and 32 contingents at least one medal in the National Games.

For a while it looked like there would be a surprise gold for Gujarat in the swimming pool. Their gambit of fielding Aryan Nehra and Anshul Kothari in the first two legs of the 4x200m Freestyle worked well, giving rise to hopes in the hearts of the home fans. Karnataka’s S Siva and Aneesh S Gowda, however, packed too much power in the next two to win by a comfortable margin.

There was delight for Gujarat at the Riverfront Sports Development complex in Ahmedabad where up and coming Gujarat tennis player Zeel Desai helped the State retain the Women’s Singles gold ̛in defending champion Ankita Raina’s absence The third-seeded Zeel Desai led Karnataka’s Sharmada Balu 6-2, 3-2 when the latter retired with an ankle injury.

Tamil Nadu’s Manish Sureshkumar also benefitted for the physical discomfort and rib pain Maharashtra’s Arjun Kadhe faced after winning the opening set. He could not maintain the same tempo after taking a medical time-out in the second set and Manish Sureshkumar pounced on the opportunity to win 2-6, 6-1, 6-3.

At the IIT Gandhinagar’s Squash facility, Tamil Nadu’s Sunayna Kuruvilla staged a dramatic comeback to win the Women’s Singles gold. Urvashi Joshi of Maharashtra won the first two games 11-9 and 11-7 but Sunayna found her rhythm to turn the final on its head. She conceded just 13 points in winning three games to romp home winner.

The Lawn Bowls competition drew to a close at the Kensville Golf and Country Club near Ahmedabad with Assam’s Sunil Bahadur beating Soumen Banerjee (Jharkhand) 16-9 in the Men’s Singles final. Navneet Singh, Ayush Bharadwaj, Apurv Ashutosh Sharma and Abhishek Chug teamed up to beat West Bengal by the skin of their teeth, 15-14, in the Fours final.