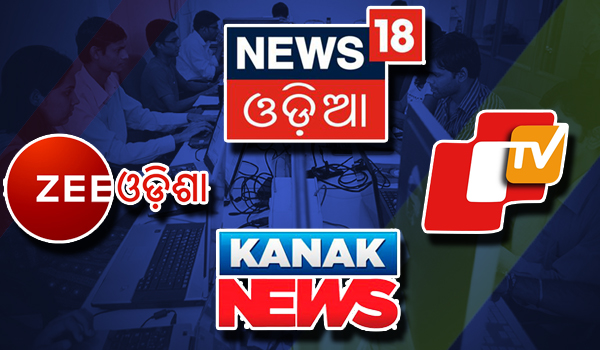 The media scenario in Odisha, specifically of the news channels, is little obscure. A panoramic view can only reveal a landscape of monotony where one channel, that is Odisha Television(OTV) sticks its neck like pyramid dwarfing the abysmally. Be it about perception or revenue models , the gap between OTV and the rest is a whopping one and no one else has been able to measure up to its waste, let alone neck.

Few years back, say about five years, Focus Odisha had made it to the benchmark test by creating a perceptual invasion to its credit even ruffling few feathers in the OTV. Eyebrows were raised and ear lobes could sense the decibels heard with a difference. But it was not allowed to breath long and became a case of shooting on one;s own feet. Anyway, that being a past and already dumped into the incarceration of history, let’s take a look what next.

After the ETV met its twilight on its ashes emerged OTV, notwithstanding the alleged tactical leverage played  to affect the growth of the former. All is fair in love and war and one cannot grudge OTV its pride of place since then. It rose like a phoenix and subsequently getting nurtured by support of the dispensation.

Today there are eight such platforms and in this comity of news players, till date, none of the rest have been able to measure up to OTV in any aspect. It is a different matter that OTV had its priorities set later to suit a different political dispensation knowing well the perils those came its way very recently. Let us discuss the mass media, press or television, how most of them deviated from the established practices of principle, grammar and journalistic ethics viewed as essential in Indian news  media.

After the virtual death of Focus Odisha, the channel News7 was found slowly crawling  up for some time but slowly yet steadily suffered a stagnancy of sort, although not a fatal decline in real sense. Innovation today remains one of the driving principles regardless of some ethics being sidestepped for political compulsions .

When talking of ethics, the key principles, however, hover around ideals i.e how strongly we feel about humanitarian welfare as a correcting mechanism and that way it can be decided what is correct and what is wrong. But in the pursuit of sensation mongering, channels tend to ignore relativism in the race to business or ratings, an inevitable tool to market and revenue. But that should not consume principles.

What happened to a channel, Kanak News, owned by a premier news network owned by a person who is not known being in politics but, it was the same person who had infused a sense of professionalism in press by paying salary to an employee or reporter which was not in vogue for long.

This channel somehow obtained some marks but again , it remains a hostage to its own assumptions of personification of channels but minus the quality. Imitations has no intelligence to speak so it did bury its roots under a drought of self-driven complacency. And the other such undoing factor that cripples the growth graph is imitations. That is the copycat syndrome and most of the channels in Odisha are still not able to wriggle out of the mind-set to get a facsimile cut and pasted out of a concept from the OTV.

Although OTV is not free from this practice partially by adopting few things from national channels like from the erstwhile Zee News’s ‘Help Line’ (Apana Eka Nuhanti) or even ‘Agyan Mind kale ki’ ,a take from the NDTV few years back. One does not know if any other channel in Odisha has anything senatorial in taste for viewers other than poor reproduction of the stuff from the neighbour’s garden.

Now it is again about the issue of constitutional freedom but the question is, if that is being exercised free from political accountability, a trend that is rampantly visible in majority of national news channels also. A sign of getting muzzled under coercion. So it does in Odisha also. You have your policies and some channels remain hostage to political compulsions for whatever reason where ethics goes back to the side lines.

The sea change in its political allegiance ,OTV, which ushered in a perplexing editorial change, but,  still does the hard work to incorporate new ideas no matter the success they derive from viewers.

No one  or channel can afford an isolation from the traditional mass media and the Tv channels are now to face to face with bigger challenges which are of high speed in nature. Advent of Social media have ushered in not only huge accessibility but it enjoys a close proximity with the general mass. A state where the news channels are really to be on guard all the time through innovation.

To discuss the rest would not be relevant at this point.