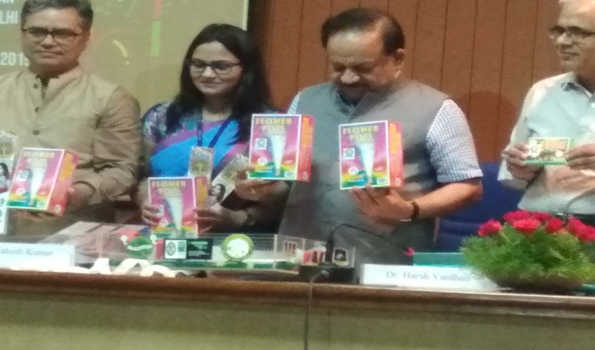 Launching ‘green crackers’ for eco-friendly Diwali this year, the Science and Technology Minister Dr Harsh Vardhan on Saturday said that a green logo as well as a Quick Response (QR) coding system has been developed for differentiation of green crackers from conventional crackers and this would also track the manufacturing and sale of counterfeit crackers.

“QR codes is a novel feature incorporated on the fire crackers to avoid manufacture and sale of counterfeit products. This will also help the consumers to track the cracker using smart phones and other devices”, he said.

Dr Harsh Vardhan also indicated that the cost of the green crackers is almost same as that of regular crackers.

He also informed that a helpline has been created for any queries related to emission certificates, QR Codes and formulations. The helpline is available at: +918617770964 and +919049598046, or, email at: director@neeri.res.in, an official release said.

“In 2018, I appealed the Indian scientific community to initiate research and development on environment-friendly fireworks. This was done to address not only the environmental concerns arising from use of existing fireworks but also protect the livelihoods of millions of people engaged in manufacture and sale of fireworks across the country”, the Minister said.

The Supreme Court had banned the sale of fire crackers in 2017 as firecrackers were adding pollution to the environment to a greater extent. (UNI)