No idol worshiping please, the PM must look beyond the celebs 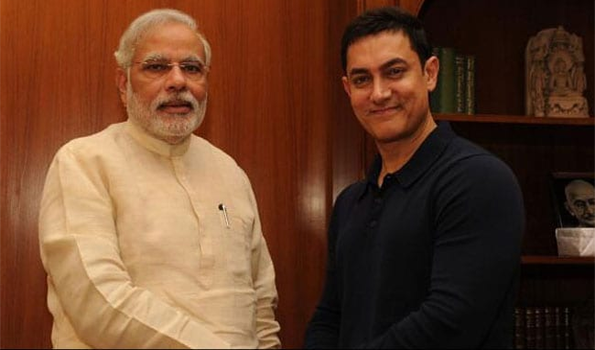 How long India should be after idol worshiping at a time the entire universe battles against environment pollution. And one of the major threats coming from the use of plastics in daily life.

A news reads that the Prime Minister Narendra Modi has applauded the support of cine actor Aamir Khan for supporting the ban on ‘single use of plastic’. Regardless of the great initiatives taken by the prime minister, his selective praise for celebs tend to mean that, idol worshiping from a position that he is in,  leaves the real heroes forlorn on the ground who really fight for many such caused at the grass-roots.

It had been noticed at many occasions that the prime minister enjoys directly eulogising personalities like the celluloid personalities for their ,mere statements on certain issues, whether environ, wellness, patriotism or any burning issue assumed as significant.

Does people see Aamir Khan ever get down from the web of a  tight maze of security to walk down the lanes to see the litters. They do not. Whereas, there are invisible millions who are rooted with such cause but never hog the headlines, let alone a tweet from the PM or a photo op. Why should we gloss over the obvious ! The celebs merely indulge in make-believe antidotes to remain focused, just.

These people pander purposefully to suit the occasion and please the mighty and get patted through extraordinary appreciations, that only serve a kind of self-aggrandizement and not solving the real issues at the bottom.

Why a prime minister should be thankful to a celeb who lives in his or her ivory towers and never knows what is the dirt on the ground, with which millions either live or suffer from it. Does these celebs ever lend a look at them. If they do, they do it in prearranged high voltage media limelight where scores of cameras preen on them.

Its all about a desire to be in the comity of the powerful that few celebs are crazy about. Sometimes, they can be seen commenting on issues they should not choose to be playing the preacher roles for.

How many of them walk down the battered landscapes  ravaged by needy, hungry and the things more relevant than the celluloid image building through the adds, social media and posters. Fictions may reproduce history, rightly or wrongly, but they cannot change or create history.

The prime minister Modi surely deserve respect for his efforts at creating awareness but for that the Indian mass do not, perhaps, require moral crutches made out of tweets from celebs those who are far removed, a majority of them,, from the bottom realities and pain on the ground.