No place for violence, intimidation or fraud in Afghan elections: UN chief 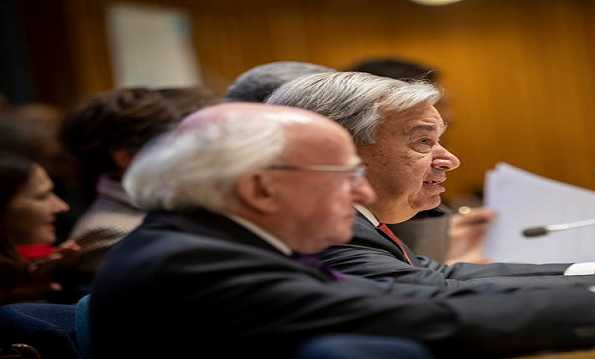 United Nations, Sep 28 (UNI) All key actors in Afghanistan must “uphold their responsibility to support a peaceful, credible, transparent and inclusive electoral process”, UN Secretary-General Antonio Guterres said in a statement.  Mr Guterres on Friday said, “There is no place for violence, intimidation or fraud in Afghan elections.”

Afghanistan has been plagued by repeated deadly acts of violence in the months preceding the elections, which have been delayed twice because of security concerns. Last Tuesday, two suicide attacks left dozens dead: an explosion at an election rally for President Ashraf Ghani in Charikar, north of the capital Kabul, which killed some 26 people, including children; and a blast in Kabul’s Green Zone, where the defence ministry, US embassy and NATO headquarters are located, killing 22. There are fears that, with the Taliban threatening to unleash violence, Saturday’s election could see more attacks.

Mr Guterres urged all stakeholders to ensure that all Afghan voters are able to exercise their right to vote, and declared that this is “crucial as Afghanistan strives to consolidate a democratic and inclusive political system”. Any acts of violence against the electoral process, continued the UN chief, including attacks directed at polling centres, polling staff and voters, are unacceptable.

According to media reports, the Afghan Government will shut 2,400 polling stations, citing security reasons, but some local officials are claiming that the closures are politically motivated, and an attempt to suppress the opposition vote. The United Nations Mission in Afghanistan (UNAMA), published a tweet on Friday noting the announced closure of 445 more polling stations on election day: “Transparency key to credibility”, the mission said. “Imperative to clarify where these Polling Centres are located – voters have a right to vote and need to know”.