Pakistan on the boil, Imran gets 2 days ultimatum to quit 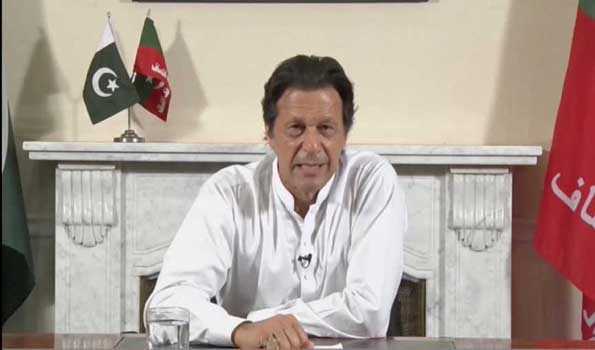 As it appears democracy is something that does not go well with a nation like Pakistan. Among several hoods raised in Pakistan against Imran, the bigger one is that of Maulana Fazlur Rehman, a man known for his extreme fundamental approaches. However, like unity in diversity, besides Jamiat Ulema-i-Islam chief Rehman, many other angry souls have come out to support Rehman. But, the question is, if Imran quits or kicked out, after that what?

Jamiat Ulema-i-Islam (JUI-F) chief Maulana Fazlur Rehman has given Pakistan Prime Minister Imran Khan a two-day ultimatum to resign, saying only people of the nation and not any “institution” have the right to govern the country.

”The PTI government had come to power through ”rigging” in the 2018 general elections. This Prime Minister should resign,” the 66-year old cleric was quoted as saying by The Express Tribune.

Addressing a protest rally on Friday,  Rehman said if state institutions will try to protect the ”illegitimate government” after the expiration of the two-day deadline, then they would be free to ”form an opinion about the institutions”.

He accused the Imran Khan-led government of destroying country’s economy.

Slamming the PTI government for its house and job poll promise, the JUI-F chief said,”They promised five million houses and 10 million jobs, but only State Bank’s governor and FBR’s chairman came to Pakistan for jobs – and they too were sent by the IMF [International Monetary Fund.”

Top opposition leaders, including PML-N president Shehbaz Sharif, PPP Chairman Bilawal Bhutto Zardari, PkMAP chief Mehmood Khan Achakzai and ANP’s Asfandyar Wali, turned up to share the stage with the JUI-F leadership and slammed the PTI government for its ”anti-poor policies”.
Sharif claimed, ”We will rebuild Pakistan once again under the leadership of Nawaz Sharif and our economy will be back on its feet within six months.”

Denouncing the government for its ”flawed economic policies which had made life difficult for the common man”, the scion of the Bhutto dynasty said, ”This is a selected government and its policies have proven that public welfare has never been a consideration for them. The people of Pakistan have never and will never accept this government.”

Addressing a rally in Gilgit-Baltistan, the Prime Minister said, “Gone are the days when one used to use Islam to gain power. This is a new Pakistan. Sit however long you want. When your food runs out, we will send more. But we will not give you an NRO [National Reconciliation Ordinance].”