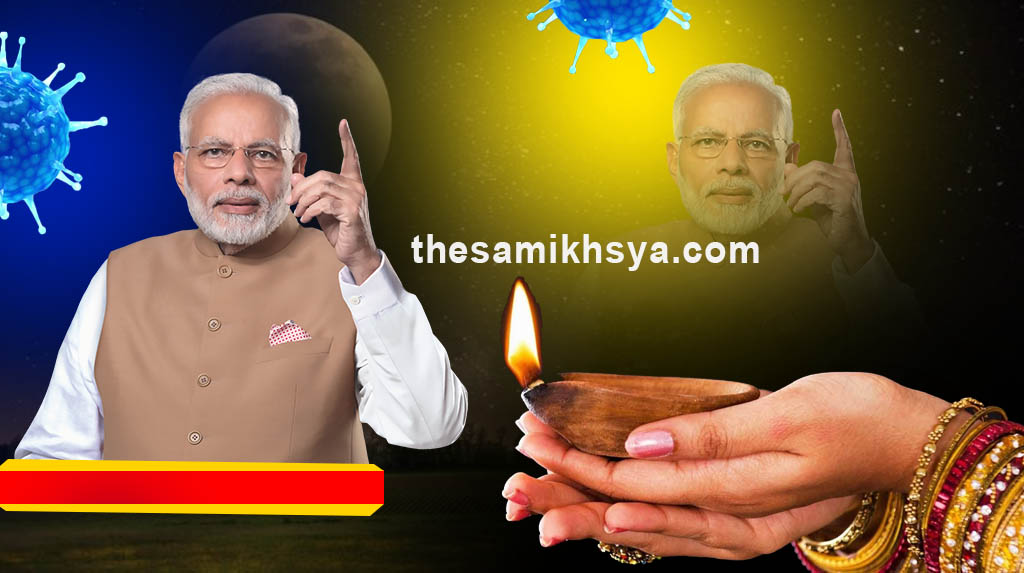 Bengaluru: Prime Minister Narendra Modi’s call to light lamps on Sunday at 9 p.m. for 9 minutes to dispel the darkness caused by the coronavirus pandemic evoked a mixed response from the people in Karnataka.

Though many hailed the video message and agreed to light a lamp, light a candle or flash a torch or mobile phone on Sunday, others questioned the rationale behind Modi’s call as he did not explain the real benefits of such an exercise in the fight against COVID-19.

“No astrology or astronomy is involved in Modi’s call to the people again in the nation’s war against COVID-19. As a great psychiatrist, he reads the people’s mind and feels their pulse, as evident from the response his ‘janata curfew’ call on March 22 from 7 a.m. to 9 p.m. and for clapping, cheering and ringing bells 5 minutes at 5 p.m. evoked,” BJP’s state unit spokesman G. Mudhusudan told IANS here.

Expressing relief over Modi not giving another shocker to the people as he did on March 24 night at 8 p.m. by announcing a sudden 21-day lockdown across the country from March 25 to break the virus chain, a Congressman said the prime minister should explain the significance of the ensuing event and what if some people don’t agree with him and don’t switch off lights to light a lamp or candle.

“Contrary to the people’s fear of the lockdown being extended by a week or two, Modi’s call has always an element of surprise. Prior notice on Thursday of his 9 a.m. message fuelled more speculation than curiosity on what he would tell or ask citizens to do. It is now for the people to decide and respond either way,” the opposition leader told IANS but declined to be named.

In a 10-minute audio/video message in Hindi that was broadcast on radio and telecast on all television channels, Modi urged the people to switch off the lights on Sunday night at 9 p.m. and light a lamp or candle for 9 minutes outside their house or balcony to dispel the veil of darkness and free the country from the scourge of the virus.

“As Modi wants to involve every citizen, especially the common man in decision-making for the country’s welfare, he hopes the unique event will unite the people and strengthen the nation’s resolve to overcome the dreaded disease with minimal loss and damage, said Madhusudhan, a former lawmaker, from Mysuru.

Terming the attempt as a show of strength and unity against the virus, Modi said the discipline and spirt of service the people had displayed during the lockdown was unprecedented and embodied the country’s ethos.

“Whether it is people’s curfew, ringing bells, clapping hands or clanging plates; they have made the nation realise its collective strength in these testing times. It has led to the deepening of the belief that the nation can unite as one in the battle against Corona,” asserted the prime minister.

Hailing Modi’s call, P.S. Divakar, a civil engineer in this tech city, said he and his family would switch off lights on Sunday and light diyas (lamps) outside their home in the southern suburb and hold lit candles for 9 minutes as advised by the prime minister.

“If the entire nation could respond to the 21-day lockdown and stay at home for the safety of the people, I am sure majority of the people will spare 9 minutes and light a lamp as told by Modi, who is, after all, our prime minister,” an upbeat Divakar told IANS on phone.

Endorsing Modi’s call, K. Pushpa, a high school teacher in the city’s northwest suburb, said despite facing hardship due to the sudden lockdown, she would light a lamp or a candle and hold it for 9 minutes if it helps in the war against the invisible enemy.

“Although I don’t agree with Modi on many things, including his party’s (BJP) ideology and his government’s economic policies like lowering interest rates on savings, which hurt a ordinary woman like me, I support him in this fight against the deadly disease as he is trying his best to save the country from its fallout and protect the people with a decisive leadership,” Pushpa told IANS.

“With the timely measures the central and state governments have taken to contain the virus spread, the people are confident that the country will come out of the unprecedented crisis with minimal loss of life and damage to the economy by winning the bacteria war to emerge stronger,” asserted Madhusudhan.

While the majority of the citizens agreed to respond to Modi’s request as they did on March 22, some like Ashok Rao, a techie, working from home, said he was not going to waste time by indulging in such “theatrics”, as it would not make a difference to the misery that befell the people due to the virus and the sudden lockdown to contain it.

PM  Narendra Modi’s call to light lamps on Sunday at 9 p.m. for 9 minutes to dispel the darkness caused by the coronavirus pandemic evoked a mixed response from the people in Karnataka.
Though many hailed the video message and agreed to light a lamp, light a candle or flash a torch or mobile phone on Sunday, others questioned the rationale behind.