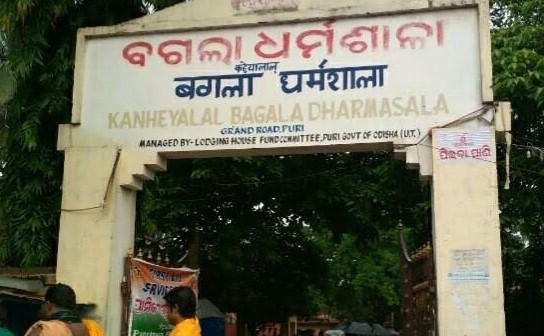 Puri, Nov 7 (UNI) Residents of all walks of life of this pilgrim city are up in arms against the attempt of the district administration to distribute Bagala Dharmshalla land to hoteliers and people displaced from the heritage zone of Sri Jagannath temple. The closely guarded secret move of the administration came to fore after Odisha Bridge construction corporation (OBCC)applied Puri Konark Development Authority (PKDA) for approval of plot layout plan on the Bagala Dharmshalla land evoking sharp reaction among the public.

Ashok Kumar Das, a senior advocate of Puri Bar Association said the administration was violating the established principles of law and even the Supreme court ruling. Kanhaiyalal Bagala Dhurmshalla constructed by Seth Kanheiyalal is situated in Balagandi mouza along the Badadanda to cater to the needs of economically backward devotees who stay there and perform religious rites like thread and marriage ceremonies at a nominal cost.

The Dharamshala has a number of rooms in its complex where poor pilgrims take shelter on their arrival at Puri. A deep pond was also dug in the complex for the use of the pilgrims. Kanhaiyalal had entrusted the district administration to run the Dharamshala long back and since then it was being managed by Puri lodging house fund committee which was formed and governed under the Bihar and Odisha places of pilgrim act 1920. In 2016-17 the India tourism development corporation demolished a portion of Dhurmshalla to reconstruct it with financial support from the government of India under PRASAD yojna.

The Director of Odisha tourism had applied PKDA for approval of reconstruction plan outlay of Bagala Dharmshalla which is still pending for approval. On November 2, 2018, the state government repealed the Bihar and Odisha places of pilgrim act 1920. The lodging-house fund committee along with Bagala Dharamshala and its land was merged with the Puri municipality.

In a surprise move, the executive officer of the municipality obtained permission from the director of municipal administration and transferred the Dharmshalla land to revenue and disaster management on October 25, 2019. Advocate Ashok Das said the position of law is clear adding that the Dharmshalla property status cannot be changed by the administration. The land on which a Dharamshala is built as per law automatically vests with Dharamshala. The state is only caretaker, not owner while the public is beneficiary and it is the duty of the state to protect and manage the Dhurmshalla, he said quoting from the law book

The collector, Mr Das said is not the owner of the property. He is a trustee to manage affairs of Bagala Dharamshala. The settled principle of law says the trustee has no right to change the status of Dharmshalla, he added. Mr Prasanna Kumar Dash, Convenor of Sachetan Nagarik Manch, a leading NGO of Puri in a letter to Chief Minister Naveen Patnaik had urged him to protect the Bagala Dharamshala.

The district administration, he said is planning to allot plots for hotel construction and rehabilitation of displaced persons from the ongoing demolition operation around the Sri Jagannath temple. The state heritage conservation council in its October meeting decried the action of the collector to allow huge construction projects in Jagannath Ballav mutt which is functionally connected with the nitees and rituals of Lord Jagannath and urged the chief minister to protect Jagannathballav and Bagala Dharamshala.

Puri press club Chairman Rajkumar Mohanty said when there were huge and a number of property in various important places of the city the government should not initiate steps to destroy the Bagala Dharamshala and Jagannath Ballav. Moreover, the administration should not twist the legal system and override the settled principles of legal governance to suit its agenda and purpose, he said and warned the government move might trigger agitations.

Rotarian Debi Nanda also criticized the attempt of the administration to introduce the plotting scheme on Bagala Dharamshala land. He dubbed the government’s action to destroy the ethos of charitable and low-cost socio-religious institutions like Bagala Dharamshala which is rendering service to poor since last seven decades as “unwarranted and unjust “.