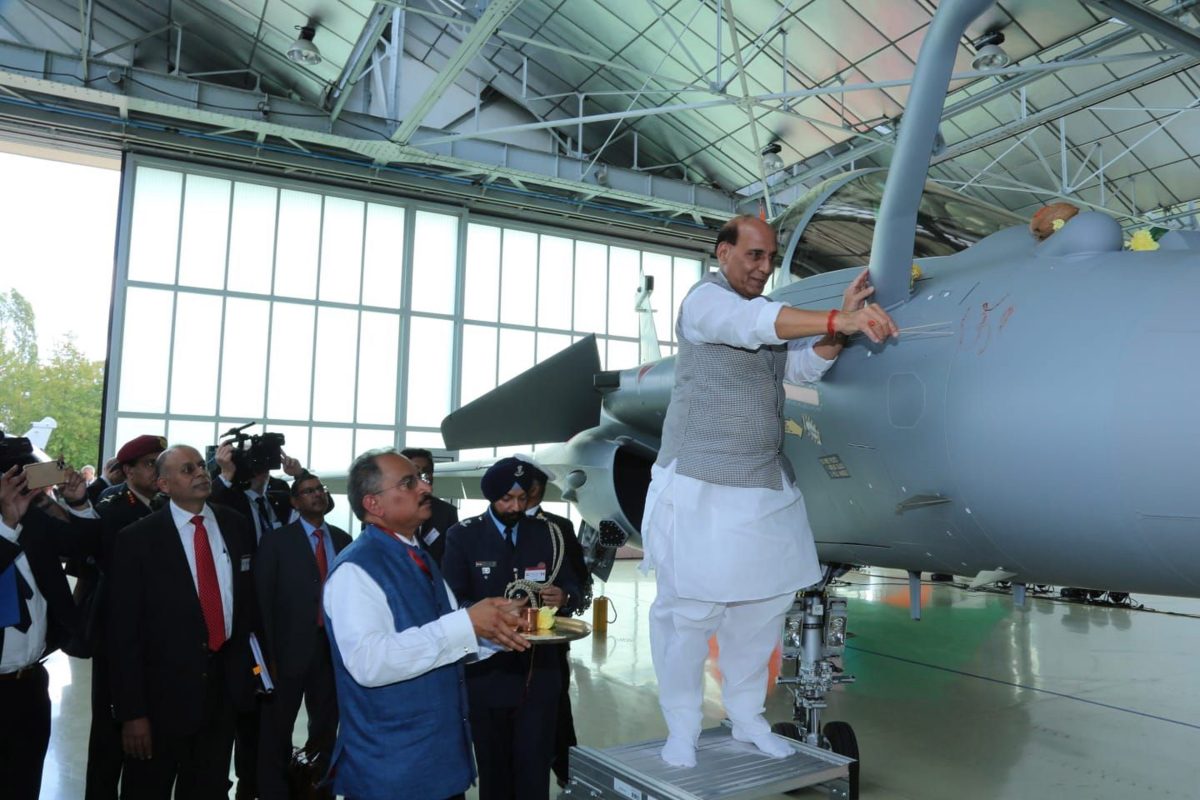 New Delhi: Amid a war of words between the Congress and  BJP on the ‘Shastra Puja’ by Defence Minister Rajnath Singh on Rafale  aircraft, which was handed over to France on Tuesday, the Congress  on Wednesday said that questions still persist on the delay in the  acquisition of the aircraft by the Narendra modi government at the  Centre.

Talking to  reporters here, AICC Spokesperson Pawan Khera said, ”The issue about  Rafale is not about it’s capability. We know it is the best aircraft,  which is why we pushed for it. ”It  was the NDA, which scrapped the deal reached during the UPA rule,  delaying the acquisition of the aircraft by India. If we had stuck to  the schedule, we would have had the Rafale aircraft long ago. These are  serious questions. You owe an answer to the people,” he added.

Earlier  on Wednesday, Congress leaders Sandeep Dikshit and Alka Lamba, reacting  to the ‘Shastra Puja’ on the Rafale aircraft, had accused the BJP-led  dispensation of saffronising the Rafale handover in France. Reacting  to the Shastra Puja, former Union Minister and senior Congress leader  Mallikarjun Kharge said, “We did not do this with Bofors. There is no  need to do such tamasha.”

Speaking  on the issue, Congress leader Sandeep Sikshit said, ”This is the whole  problem with this government. They dramatise everything, without any  substantive work. This religious context of Vijayadashami and the Rafale  aircraft does not match. A festival that all of us celebrate, why  should it be linked it with an aircraft?”

Ms  Lamba, a former Aam Aadmi Party legislator and now an INC leader,  tweeted in Hindi, “Imagine, what would have happened if former Defence  Minister AK Antony would have been the Minister of Defence or former  President Dr APJ Abdul Kalam had this fortune today and had they taken  the Bible or Quran as per their religion like Rajnath Singh?”

Reacting to the Congress statements, senior BJP leader and Union  Minister Prakash Jawadekar said, ”Now, what should I say what Congress  is saying on this.Talking to reporters during a post-Cabinet meet briefing, Mr Javadekar said, ”This  party has lost its way.”  Defence Minister Singh, who received the first unit of Indian Air  Force’s Rafale fighter jet from France on Tuesday at Merignac, had  performed a ‘Shastra puja’ on it.”

He also emblazoned it with the Sanskrit icon ‘Om,’  which has spiritual significance in Hinduism, Buddhism and Jainism. ‘Om’ stands for a good beginning, imperishable and divine energy, he added.