Ram Jethmalani, a brilliant legal brain who knew the art of brash handling of friends & foes 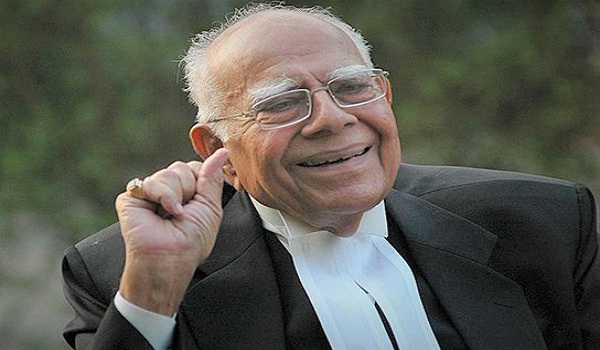 Not many would dispute that Ram Jethmalani was a man of letters. His admirers say he would even dream about ‘laws’ and various aspects of legal wars – some very famous and some not so famous. The  late Jethmalani also had his unique manner of antagonising political compatriots, sometime even the prime minister in office and his own legal fraternity with his brash handling of the stuff.

In 2000, his remarks on lawyers’ strike even led to his expulsion from the Bar Association. A brief reference to the variety of cases he represented would sum up the story of the man and his love for controversies. “I thrive in controversy because I believe in truth and I do what I believe,” the illustrious lawyer had once said.In principle, he was against ‘confessional statement’ made in judicial and police custody. “I sympathise with those behind bars and hands tied up on a chair. Put me into that, and I will confess anything”, he had said.

From opposing the death sentence of Afzal Guru, the Kashmiri terrorist kingpin, to representing clients like Harshad Mehta and Ketan Parekh, he has defended them all with the same excitement, enjoyment and enthusiasm. It was stock broker Harshad Meta and his counsel Jethmalani – who made the sensational allegation that a sum of Rs 1 crore in cash was given as a bribe to then prime minister P V Narasimha Rao. Earlier in his career, Jethmalani shot into limelight with the tag of controversy when he defended the killers of Indira Gandhi.

In politics, he remained close to L K Advani and also to incumbent Prime Minister Narendra Modi, but the BJP circle would remember him to be one Minister in the Vajpayee government – who was for sure — never in the inner circle of Prime Minister Atal Bihari Vajpayee himself. In fact, Vajpayee had ‘desired’ his resignation as Law Minister when Jethmalani clashed with the BJP veteran’s confident Soli Sorabjee, the then Attorney General.

There are reports when Jaswant Singh conveyed to Jethmalani over phone that “I have been given the unpleasant task” — the late leader (Jethmalani) completed the sentence: “I shall fax the resignation letter from Pune, tell Prime Minister I can’t send it now as I am driving to the airport”. A man full of vitality and flamboyance, he also had bitter differences with incumbent PM Modi’s confidant Arun Jaitley.

On December 1989, Jethmalani protested in front of senior Janata Dal leader Chandrasekar’s house only to be roughed up by Chandrasekhar’s supporters as Jethmalani wanted the socialist veteran to accept V P Singh as the Prime Minister. The late Chandrasekhar, who had coincidentally succeeded V P Singh, had angrily said – “Tell Mr Jethamalani, I am not an orphan. There are people who will stand for me”. In 1987, at the age of 64, Ram Jethmalani filed his nomination papers for Presidential elections provoking Marxist doyen Jyoti Basu to remark: “It is not the time to run for President, it is time to run for life”.

He is survived by his son, noted lawyer Mahesh Jethmalani, and a US-based daughter. His other daughter Rani Jethmalani also died on December 31, 2011. He had fought criminal, civil and many Constitutional matters in various courts. A man who kept wooing headlines and controversies, Jethmalani had earned the reputation of being a ‘smuggler’s lawyer’ after he defended Haji Mastan in a smuggling case. He was member of the Lok Sabha in the sixth and seventh Lok Sabha on BJP ticket from Bombay but after he developed differences with Vajpayee in 2000, he quit BJP and also contested against Vajpayee himself in 2004 from Lucknow.

Notwithstanding the controversies, there can be hardly any dispute that his virtues and talent were unique. Someone who had attained the law degree at the age of 17 in Karachi and being the ‘youngest lawyer’ in Sind province in pre-partition India, he had to persuade the then Chief Justice of Sind to pass a special order to relax the rules which had then mandated that a lawyer had to be 21 years to start practice. After partition, he moved to Bombay (now Mumbai) in 1948 and started practicing and the rest of it – as they say is history.