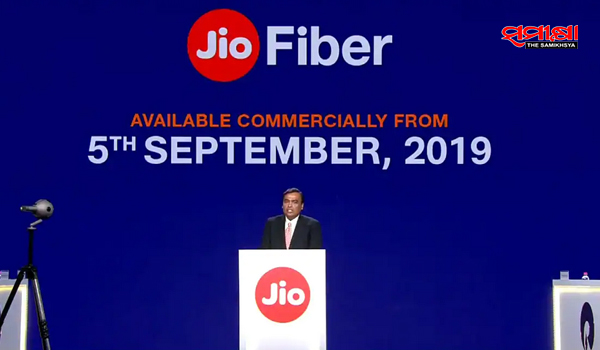 Reliance Jio announced its latest offering Jio Fiber on Monday. The announcement was made by Mukesh Ambani at the Reliance 42nd Annual General Meeting in Mumbai.

The Jio Fiber service promises lifetime free voice calls from landlines, 100 mbps minimum broadband speed at subscription starting from Rs 700/month.
Mukesh Ambani apprised that the service will even offer unlimited international calling pack from its landlines to the US and Canada at Rs 500/month.
“The default tariff plans will be one-fifth to one-tenth of existing market tariffs,” he mentioned.

Comparing the Jio Fibre services with those available in the US, he claimed, “the average fixed-line download speed in the US which is the most developed economy is around 90 Mbps. In India even the most basic Jio Fiber plan starts with 100 Mbps speed.”

“Jio Fiber plans will be priced between Rs 700 to Rs 10,000 per month to suit every budget,” he assured. Lauding market penetration of Reliance Jio, he lamented that in a span of nearly 3 years, it has become the largest network provider in India, and ranks second globally