Rs 455 Crore Deepavali Liquor Sales in a State of India 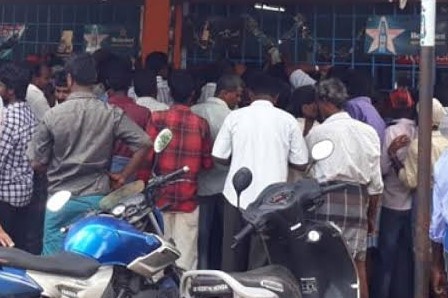 This Deepavali season, the Tamil Nadu government, enjoying an exclusive monopoly over sale of IMFL, has raked in the moolah through sale of liquor for a whopping Rs 455 crore, which far exceeds the target of Rs 385 crore, official sources said.    The total sales of the Tamil Nadu State Marketing Corporation (TASMAC), running retail outlets, during three days including on Deepavali (Sunday, October 27), has broken a new record. While the sales in 2018 was Rs 325 crore, this year it had witnessed a quantum leap touching Rs 455 crore.

Giving the break-up, the sources said sales on October 25 was Rs 100 crore, on October 26 it was 183 crore and on October 27 it was Rs 172 crore.  To achieve the target, the TASMAC management has reportedly issued directives to the employees to keep the required level of stocks and advised not to take leave besides being punctual in opening the outlets. While total sales during Deepavali season in 2017 was Rs 245 crore, it was Rs 265 crore in 2016. However, during the five-day Pongal festival in January this year,

TASMAC’s sales touched a whopping  Rs 735 crore with Madurai region remaining on the top of the chart. In Tamil Nadu, sale of Indian Made Foreign Liquor (IMFL) is the exclusive monopoly of the state government which markets and runs retail outlets through TASMAC. Further, the revenue from TASMAC helps the government to bankroll the populist programmes. And last year, the revenue from the sale of Indian made foreign liquor as stated in the 2018-19 budget was Rs 26,000 crore while the total turnover stood at 31,757 crore.

Festivals in the Dravidian land witness a 20-30% jump in liquor consumption enhancing the revenue of the government. While consumption used to be in the range of Rs 70-80 crore on week days, it used to go up to Rs 100 crore on weekends. And the most preferred choice of guzzlers in the state is Brandy, accounting for 60% of the liquor sales.

TASMAC operates nearly 4600 liquor shops across the state with Chennai accounting for 300 of them.    The Communist Party of India (CPI) has criticised the government fixing a sales target when the economic slowdown has robbed the festive mood. “Rather than addressing the issue of massive job loss and ensuring that the essentials are available to the poor under the Public Distribution System (PDS), the government is setting wrong priorities like fixing liquor sales,” party State secretary R Mutharasan said. ( UNI)