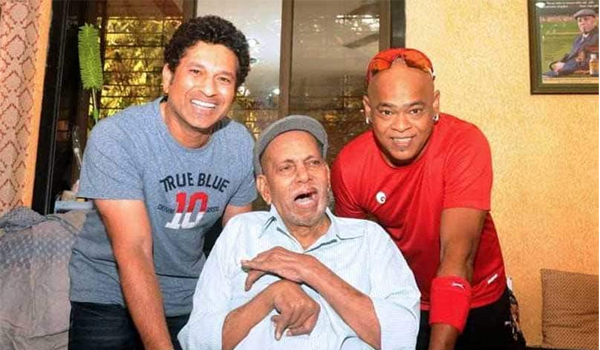 Indian cricket legend Sachin Tendulkar on Thursday went down memory lane on Teacher’s Day and remembered his late coach Ramakant Achrekar. The Master Blaster took to social media to pay tribute to his teacher who taught him to ”play straight – on the field and in life”.

In a tweet, Tendulkar shared a throwback picture of him with Achrekar and wrote, ”Teachers impart not just education but also values. Achrekar Sir taught me to play straight – on the field and in life. I shall always remain grateful to him for his immeasurable contribution in my life.His lessons continue to guide me today.” It was Achrekar, who nurtured plenty of cricketers, including the likes of Tendulkar and Vinod Kambli.

Padma Shri awardee, Achrekar breathed his last on January 2, this year in Mumbai at the age of 87. Tendulkar had given an emotional tribute to Achrekar on his funeral while stating he learned the ABCD of cricket under the tutelage of the legendary coach.

Sachin had said, ”Cricket in heaven will be enriched with the presence of (Ramakant) Achrekar sir. Like many of his students, I learnt my ABCD of cricket under Sir’s guidance. His contribution to my life cannot be captured in words. He built the foundation that I stand on.” Notably, in July, Tendulkar was inducted into the International Cricket Council (ICC) Hall of Fame along with former South Africa fast bowler Allan Donald and two-time World Cup-winning Australian woman cricketer Cathryn Fitzpatrick.