Salute to brilliant minds of ISRO: Bollywood joins the nation 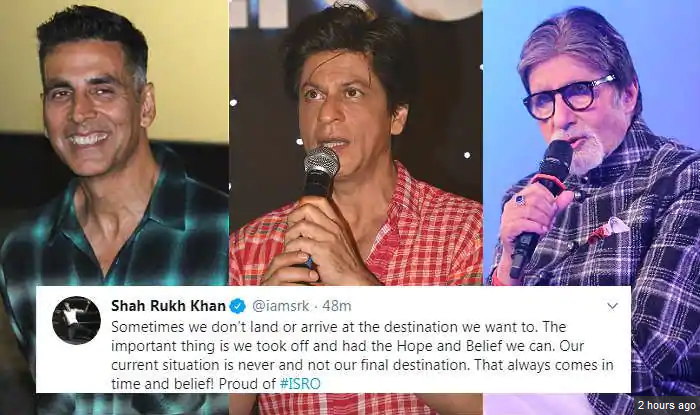 The Bollywood on Saturday took to the internet to express their appreciation for the excellent work of ISRO scientists who were the designers of Chandrayaan-2 mission. Standing in the solidarity with the scientists, the film fraternity said the country was proud of the ‘brilliant minds’. The mission suffered a technical glitch moments before Vikram’s scheduled landing on Moon’s surface. Taking to micro-blogging site Twitter, Shahrukh Khan said, ‘Sometimes we don’t land or arrive at the destination we want to. The important thing is we took off and had the Hope and Belief we can. Our current situation is never and not our final destination. That always comes in time and belief! Proud of #ISRO”.

Amitabh Bachchan said, ‘Aaj ek naya suraj nikla hai, chand ko fir pakdenge. Pride never did face defeat .. our pride , our victory .. Proud of you ISRO’. Lata Mangeshkar said, ‘Only the connection is broken, not the resolution. The courage is still high. I am sure that we will surely get success. @ISRO We are proud of our scientists.” Akshay Kumar said, ‘There’s no science without experiment…sometimes we succeed, sometimes we learn. Salute to the brilliant minds of @isro, we are proud and confident #Chandrayaan2 will make way for #Chandrayaan3 soon. We will rise again.” Ajay Devgn said, ‘The country stands together, proud and hopeful! Thank you @isro. #Chandrayaan2”. Anupam Kher said, “Well done @isro. We are proud of you”. Emraan Hashmi said, ‘In times when social media only brags about strengths and successes its important to teach the next gen about weaknesses and failures. If you learn from defeat you haven’t really lost. Proud of #ISRO.’ Armaan Malik said, ‘If APJ Kalam sir would be here today.. he would have been REALLY proud of the @ISRO mission. Success or failure, it doesn’t matter. We fall, we get up & we try again, with more knowledge of what went wrong so we can rectify our errors the next time we attempt it #Chandrayaan2’.

ISRO’s ambitious Chandrayaan-2 moon landing mission which carried a lander and the rover to be placed on the Moon’s surface, received a setback as the mission control ground station at ISTRAC lost control of the lander ‘Vikram’ during the last few seconds of it’s scheduled landing on the southern polar region of the moon. (UNI)