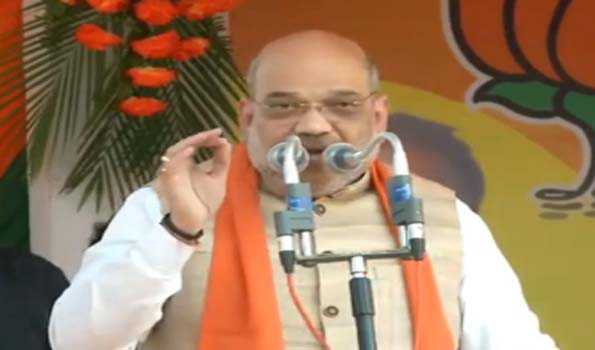 Agartala, Dec 1 The first consultation meeting of Union Home Minister Amit Saha on CAB with different political parties and civil society organisations of Tripura was inconclusive, as all the participants except BJP MPs and Tripura Chief Minister opposed the bill.

Although opposition CPI (M) and Congress did not turn up in the meeting, however, expressed their opposition in writing to Saha on the proposed CAB. Other stakeholders like BJP’s partner in the government IPFT, opposition INPT and representatives of NGOs opposed the bill citing the apprehension of misbalance in demographic profile.

“We made our arguments very clear and distinct to home minister in presence of Chief Minister and Chairman of NEDA Dr Himanta Biswa Sarma. We felt the design of the bill will certainly tell upon the demography of indigenous population and requested him to keep northeast from the ambit of the proposed CAB,” said INPT president and veteran tribal leader Bijoy Kumar Hrangkhawal adding that NRC is desperately required for Tripura but it cannot go with CAB, otherwise, it would frustrate the main purpose.


While opposing CAB, Tripura royal scion and former president of Tripura congress Pradyot Kishore Debbarman demanded settlement of Bru displaced families of Mizoram who have been residing in camps of North Tripura in the state, as he claimed Brus are the origin of Tripura and evicted due to construction of Dumbur hydel project in the ’70s.


He claimed that Tripura has had to bear the brunt of illegal migration due to persecution – economic and religious from East Pakistan before 1971 and thereafter and mentioned, “My grandfather first allowed Hindu Bengalis to temporarily reside in Tripura after the famine of Bengal and subsequently after the Noakhali riots in East Bengal.”


Pradyot further stated that his grandmother Kanchan Prabha Devi allowed the Swasthi committee, which comprised of persecuted Hindus from East Pakistan to stay in Kanchanpur of North Tripura, bordering Mizoram. However, the influx from Bangladesh continued unabated and the indigenous population was reduced to the minority over the years.


He argued, “Tripura for all practical purposes has already been an example of giving relief to persecuted Hindus from East Pakistan, an objective similar to the one contained in the proposed CAB and I am completely against the present form of CAB for Tripura, which has not yet been shared but holding discussion without seeing the content of the proposed amendment.”


Pradyot however, offered a five-point remedies to come out from the CAB fiasco that includes to form a committee with all indigenous stakeholders under MHA, increase the number of representation of indigenous people in Tripura assembly and autonomous district council, to respect the instrument of accession and other accords signed with state and central governments and follow the provision of Schedule VI of Indian constitution.


After two hours long discussion Home Minister Saha assured the meeting that CAB would not harm any community or caste in the northeast and stated that government understood to concerns of the people of the region. And if necessary he would sit again to remove the apprehension. However, parties including Pradyot indicated if the government proceeds to pass CAB, they would resort to movement.