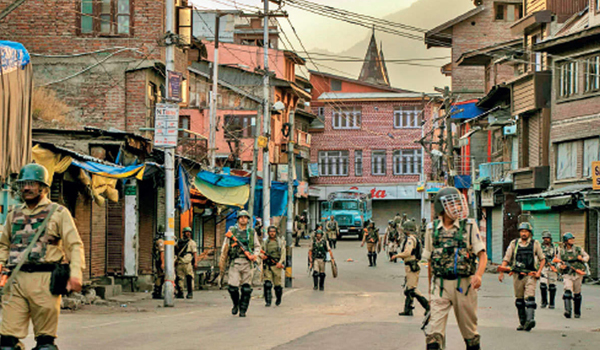 Life continued to remain crippled on Tuesday in the Kashmir valley, where people are protesting since August 5 against scrapping of Article 370 and 35 A, besides bifurcating the state into Union Territories.

Shops and business establishments, which were functioning daily for about three hours in the morning in Srinagar, including historic Lal Chowk, the nerve centre of the summer capital, remained closed on Tuesday, when a delegation of European Union (EU) Members of Parliament (MP) is on a two-day visit to Kashmir from today.

Security forces burst teargas shells and resorted to lathicharge in some areas in the uptown, Srinagar, to disperse slogan shouting and stone pelting demonstrators.

The Central Paramilitary Forces (CPMFs) remained deployed to prevent people from gathering at the historic Jamia Masjid, stronghold of chairman of moderate Hurriyat Conference (HC) Mirwaiz Moulvi Omar Farooq in the downtown, which remained closed for devotees since August 5. All main gates of the worship place are closed and CPMF remained deployed in the Jamia market and outside. (UNI)