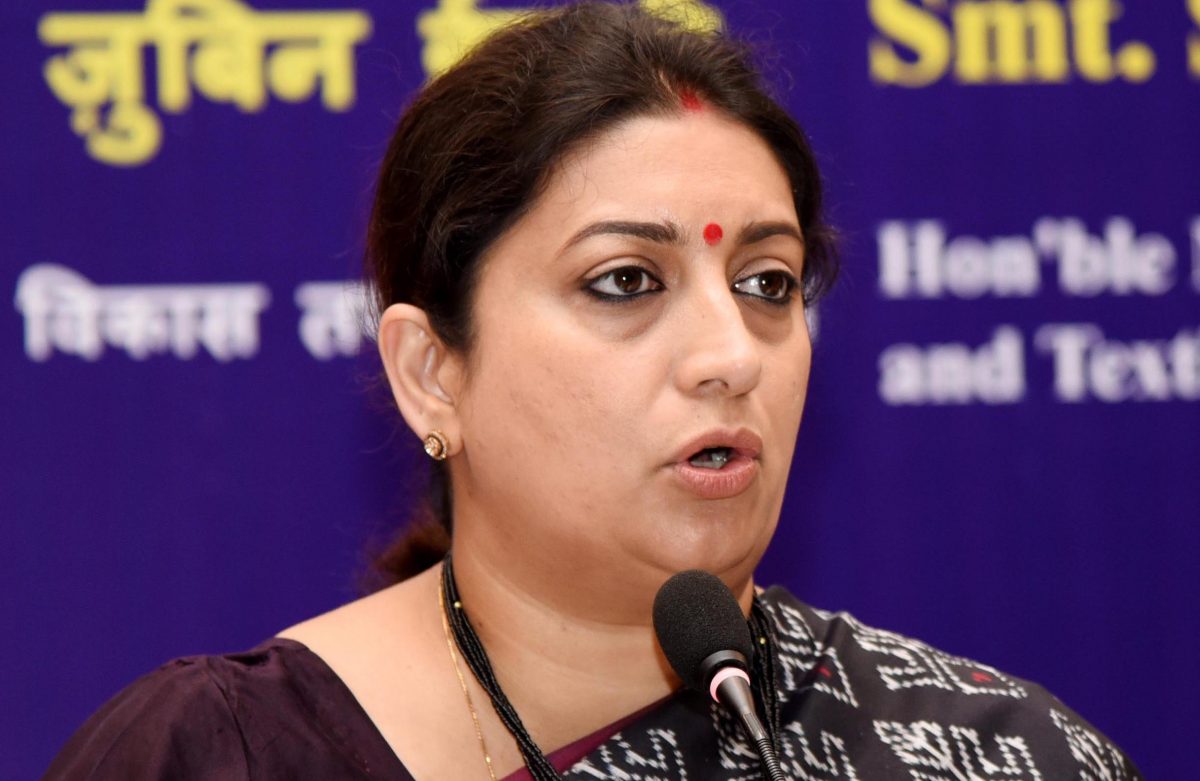 Kolkata, Sep 10(UNI)Union Minister of women and child development and textile Smriti Irani  on Tuesday slammed West Bengal Chief Minister Mamata Banerjee for her opposition to the NRC. She said the Centre was committed to protecting the rights of all citizens of the country and no Indian will be left out. Earlier, she stated that abolition of triple talaq is one of the biggest achievements of the Union Government and the abrogation of Article 370 seeks to restore not only the rights of women and children of Jammu & Kashmir but also bridges the gap between the citizens of Jammu & Kashmir as well as the citizens across all the States legislatively.

”The Narendra Modi Government had been dedicated to repeal outdated laws that were legislative burdens of our citizens,” Ms Irani said. Ms Irani, who was in the city to speak about the remarkable measures taken by the Union Government in the past 100 days to the media, pointed out that 58 laws have been repealed in totality. She said, since 2014, a record of 1 thousand 486 laws have been repealed under the present Government.

Ms Irani reiterated that this Government has been dedicated to boost Indian farmers. She even mentioned the PM Kissan Yojana has enabled every farmer forthe first time to receive Rs 6,000 a year, from the Indian treasury directly into their bank accounts. According to Ms Irani, in the last hundred days, the Modi Government has extended PM Kissan Yojana to a total of 6 crore 37 lakh farmers across the country.

Another Rs 8,955 crore has been directly transferred to farm families in the last 100 days under PM Kissan Yojana, she said adding under this Government and PM Kissan Yojana the total transfer of money is Rs 20,200,50 crore. She even pointed out that in the first three years with an outlay of Rs 10,774 crore, five crore small and marginal farmers under the pension scheme will be covered.

The minister said apart from strengthening of farmers, in the past 100 days, the Government has dedicated itself in labour reforms. The country now sees benefit for 50 crore unorganised sector across the country, she said and added in 2019, the Government is paying six minimum wages to the entire workforce of the country.

”A woman’s consent is required now to know whether she is willing to work in night shift. The occupational safety has been prioritised upon in 2019, thus ensuring protection of working and health condition of our workers. Many workers of unorganised sector, agricultural workers, labours, people working in restaurants and dhabas, and chowkidars, who were outside the ambit of minimum wages, now will be benefited by the reforms of the Modi Government,” she reiterated.

The legislative frame of wage will be provided to even these workers, she commented. The Ujjwala Yojana, Ms Irani said, has been universally acclaimed and the target of the Government was to reach eight crore beneficiaries by March, 2020. However, six months in advance, the target of this yojana has been achieved, the Minister stated. She said, within the last 100 days, 18 lakh beneficiaries have been added in the Ujjwala Yojana.

The Minister said, to strengthen start-ups, a dedicated cell has been set up within the Government. She even stated that small start-ups with turnover up to Rs. 25 crore will continue to get tax holiday. So far as health sector is concerned, the Minister said, close 9 crore 10 lakh beneficiaries have received Ayushman Bharat e-card. She said 75 new medical colleges in the first 100 days of the present Government have been approved which will lead to an increase of 15 thousand 6 such colleges in the country. The Union Government, Ms Irani said, is also dedicated to minimise the incidents of sexual offences towards children. Among the dignitaries present, was Ms Jane Namchu, Additional Director General, Press Information Bureau, Kolkata.