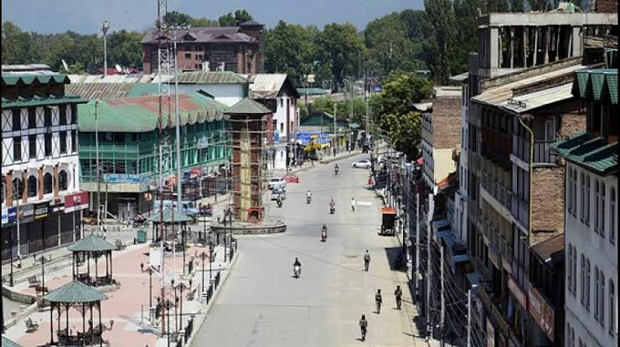 The famous “Sunday Market” in the summer capital, Srinagar was open today while shops and business establishments remained closed in the civil lines and downtown Srinagar.

However, barring parts of south, life is limping back to normal in Kashmir valley, where people are protesting against scrapping of Article 370 and 35 A, besides downgrading the state and dividing it into two Union Territories (UTs) on August 5.

There was no relief for the leaders of all mainstream and separatist organizations, including three former Chief Minsiters—Dr Farooq Abdullah, his son Omar Abdullah and Mehbooba Mufti—who are under detention in the valley, where internet and pre-paid mobile services remained suspended in the valley since August 5.

Additional Central Paramilitary Forces (CPMF), rushed from different parts of the country days before the special status of the state was withdrawn, remained deployed in the valley, including Srinagar to maintain law and order.

There was no change in the situation in and around the historic Jamia Masjid, stronghold of moderate Hurriyat Conference (HC) chairman Mirwaiz Moulvi Omar Frooq, who is currently under house arrest since August 4. All gates of historic Jamia masjid remained closed since August 5. Jamia market and shops and business establishments in other parts of the down town and Shehar-e-Khas (SeK) remained closed. Additional security forces remained deployed outside the masjid and a bullet proof vehicle was parked outside the main gate.

Sunday Market spread over about three km in the civil lines was open and a large number of vendors have put up their stalls.

Business and other activities remained suspended on Sunday in the summer capital, Srinagar, including historic Lal Chowk, the nerve centre of the city. Shops and business establishments remained closed in main business hubs of civil lines, Batmaloo and down town. However, shops, particularly selling vegetables, fruits and other essentials were seen functioning in the uptown and outskirts of the city.

For the past more than a month, shops and business establishments were functioning for few hours in the morning and later in the evening in the city and outskirts. Many public transport vehicles, including three wheelers and cabs, were also plying in the city and on district routes.

A report from Anantnag said that partial strike was observed on Sunday in this and Kulgam while life remained affected in Shopian and Pulwama districts in south Kashmir, a report received here said.

Majority shops and business establishments were functioning in Anantnag and Kulgam districts, where a number of cabs and other public transport vehicles were plying.

However, situation in Shopian and Pulwama was different as majority shops and business establishments remained closed and traffic was off the roads. However, some cabs and three wheelers besides private vehicles were plying.
Life was near normal in this and other north Kashmir towns, a report from Baramulla said. Majority shops and business establishments were functioning and transport was also plying.

Shops and business establishments were functioning partially in central Kashmir district of Budgam, where some public transport vehicles were also plying.