The ancient temples of Osian 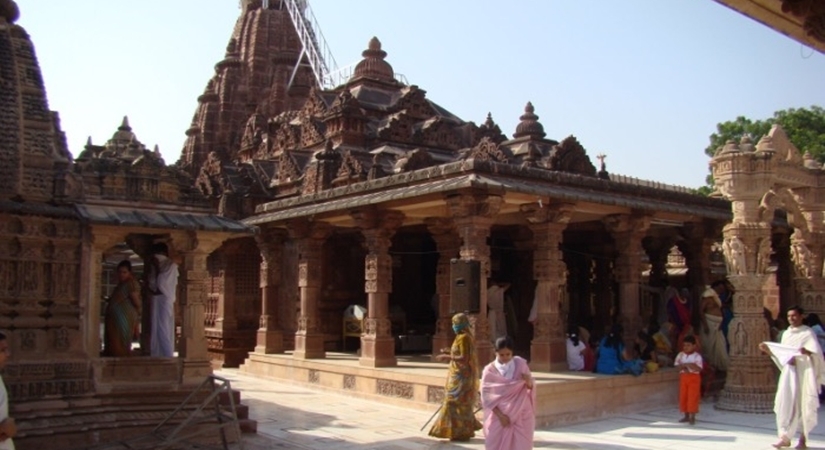 New Delhi: In the midst of a small township, on the road to Jaisalmer and about 60 kilometres from Khimsar, stand the ancient temples of Osian. This area is said to have been an important trade centre for Jains between the eighth and 12th centuries AD.

Osian has now had now a place of Jain pilgrimage and a temporary stop-over for travellers on their way to Jaisalmer. It is said that there is a strong belief among Jains that on his way to the Thar desert, Lord Mahavira, the last Jain Tirthankar, had passed through the tiny village of Khimsar. It is also believed that the impression of a pair of footprints on a stone slab, preserved with great reverence in a small temple on the outskirts of Khimsar, belongs to Lord Mahavira. This legend attracts a large number of devout Jains to this very day. Besides pilgrims, tourists visiting the area, also consider this shrine on their ‘must-see’ list.

Counted among the earliest of all the medieval temples in Rajasthan, the temples of Osian situated on the outskirts of Jaisalmer, are also among the most beautiful and well preserved. In this group of temples, eleven temples date back to the eighth century AD and are more like miniature shrines than big temples – some rising only eight feet in height. The remaining temples date back to the twelfth century and stand in a cluster on a hillock towards the east.

Osian is said to have been founded by Utpaladeva, a Rajput Prince belonging to the Pratihara Dynasty. In earlier times, the city was known as ‘Ukesha’ or Upkeshapur.’ The temples of Osian are believed to have been the major religious and cultural centre of the Kingdom of Mewar. Even to this day despite the ravages of time, we are able to get a glimpse of the exquisite handiwork of the artisans of that era – a precious royal legacy of that period.

Among the many intricately carved, red sandstone edifices, three are dedicated to Harihara – symbolically the union of Vishnu and Shiva. These temples built on a raised platform, are considered to be some of the finest examples of temple architecture, owing to the profuse and intricate carvings that adorn their walls and pillars, beginning at the base and continuing up to the pinnacle of the spires (known as Shikharas).

The Sachiya Mata Temple is said to have been built in two phases. The initial structure was built in the eighth century while the present temple is said to date back to the twelfth century. Dedicated to Sachi Mata (also known as Indrani) wife of Lord Indra ( the Rain God), one can appreciate the importance of prayers at this temple that is located on the outskirts of the Thar Desert. The temple complex also has two other shrines dedicated to Chandi Devi and Amba Devi respectively. Having been built in many phases, this temple can be entered through a series of beautifully sculpted arches. The temple interiors are decorated with beautiful images from the Hindu Pantheon. This includes an image of Varaha (an incarnation of Lord Vishnu) and a splendid image of Lord Vishnu and Lakshmi.

Among the older temples is the one dedicated to Lord Surya, the Sun God. It dates back to the 10th century AD and is perhaps the most graceful structure in Osian. The human figures engraved on the temple include those of Gods and Goddesses that are reminiscent of the languid grace in the carvings of Khajuraho and the Sun Temple at Konark. The sanctum comprises of a striking idol of Lord Surya, while the main hall has idols of Lord Ganesha and Goddess Durga In the latter the ceiling is festooned with images of serpents coiled around leaves and flowers.

The Mahavira Temple built by the Prathara King Vatsa dates back to 783 AD. It is by far, the most magnificent among the Jain group of temples built during the eighth century. It is celebrated for its stunning architecture. The main shrine with the image of Lord Mahavira is built on a high platform made of sandstone. The door to the sanctum is carved with a bevvy of young maidens, while intricately carved pillars adorn the site of the main porch.

The Mandap (pavilion) with its pillars and the convex ceiling is ornately decorated with exquisite figures, carved much after the figures in the pavilion built earlier. The pavilions open on to a huge hall, with 30 gracefully decorated pillars. Such halls were known to be used for large gatherings such as cultural programmes and community meetings. The floral patterns on the pillars follow the popular vase and foliage pattern – in this design, they are somewhat dissimilar to the carved pillars at Ajanta and Ellora. The plinths of these pillars are unusually wide – a common feature in all Jain temples of the period. The proximity to the Thar Desert and its dry air has helped to preserve the carvings, which still retain the sharp details of the carvings.

Adding to the entire ambience is the mesmerizing sound of temple bells at dawn, announcing the time for prayers. As you enter the temples, you are met by the fragrance of sandalwood and the sound of rhythmic chanting in the air. You feel a sanctity and serenity of mind and heart that is little known outside the portals of the temples. Dressed in pristine white, the monks go about their daily chores, performing their assigned duties, undisturbed by the presence of the devotees and the pilgrims. The head monk can be seen dressed in a red dhoti and a bright yellow shawl that distinguishes him from the other monks. With their mouths covered, a tradition which Jain monks follow strictly at all times, the prayers are said every day, with a large number of devout Jain pilgrims, from far and near.

Life here has not changed much through the centuries, in contrast to the metamorphosis that the rest of the country has gone through. A visit to the temples of Osian is like stepping back in time, to an era in contrast to the modern way of life. The Osian temples stand in their glory, as living proofs of the architectural marvel and the cultural ethos of yesteryear.