‘The Verdict-State Vs Nanavati’ is streaming live on ALT Balaji, ZEE 5 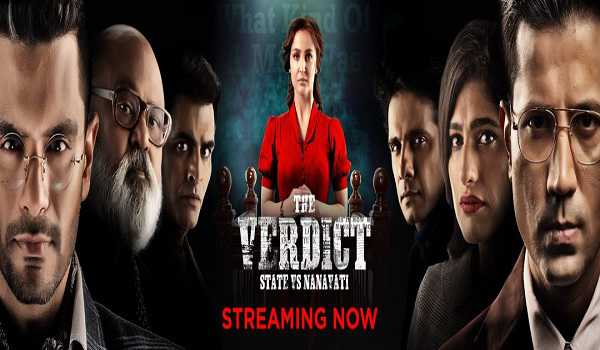 After the stupendous success of the recently launched web-series ‘Coldd Lassi Aur Chicken Masala’ and ‘Mission Over Mars: MOM’, the two Indian OTT giants ALTBalaji and ZEE5 have finally launched the most-talked about and awaited web-series of the year, ‘The Verdict: State Vs Nanavati’.

On April 27, 1959, a dashing Parsi Naval Officer pumped three bullets from his revolver into a rich Sindhi businessman and then went and confessed his brutal crime to the Police.

The infamous story of K M Nanavati Vs State of Maharashtra is still one of the most sensational criminal cases in India. Despite six decades, the story of the trial which revolved around infidelity, cold blooded murder and patriotism still grabs people’s attention.

In no time, the case became a national phenomenon where every major legal and political figure of the time made an appearance. The rich and crème of the society were involved and the social frenzy was limitless. Amongst all this, the media played an extremely influential role.

All these occurrences make the Nanavati Case truly an attention grabbing and engaging story. ‘The Verdict: State Vs Nanavati’ is based on public records, newspaper articles of the time, interviews with people who have knowledge of the case and delves into the legal drama that unfolded.

While the result of the trial is now a known fact, it is the unfolding of the case that remains a matter of interest to the nation. The web-series will see how it all came together with the defense and the prosecution trying their best to prove the other party guilty.

On the launch of ‘The Verdict- State VS Nanavati’, Ekta Kapoor, Joint MD, Balaji Telefilms said, “We have been working on The Verdict for over three years now and it has all been worth it. This is one of my most ambitious project and this time the story unfolds with Sylvia’s feeling. Till 2018 India had one sided adultery law that branded a woman as her husband’s property. Sylvia Nanavati lived in a time where love and morality didn’t go hand in hand. For the first time the audience will witness India’s most controversial case from another point of view.’

When asked about the show, Manav says, “It has been an absolutely engaging and enriching experience working on the show. Honestly I am proud to be part of an ensemble which has India’s most prolific and veteran actors like Makarand Deshpande and Saurabh Shukla. Lot of research has gone into etching out each character and I am sure that audiences will be gripped by it’s different narrative and the impressive portrayal of characters by all.’

‘This is my digital debut and for the very first time I get to exhibit and experience a gamut of emotions with my character. Sylvia is a very vulnerable character and just imagining what the woman must have actually gone through in reality, excited me to portray it with utmost honesty. I am grateful to Ekta Kapoor for believing in me and my director Shashant Shah for giving me this opportunity. I am sure the audiences will love me in this never seen before avatar,’ Elli AvrRam stated.

Directed by Shashant Shah, the 10-episode series is based on the real-life incident that marked a landmark judgment in the history of India.  (UNI)