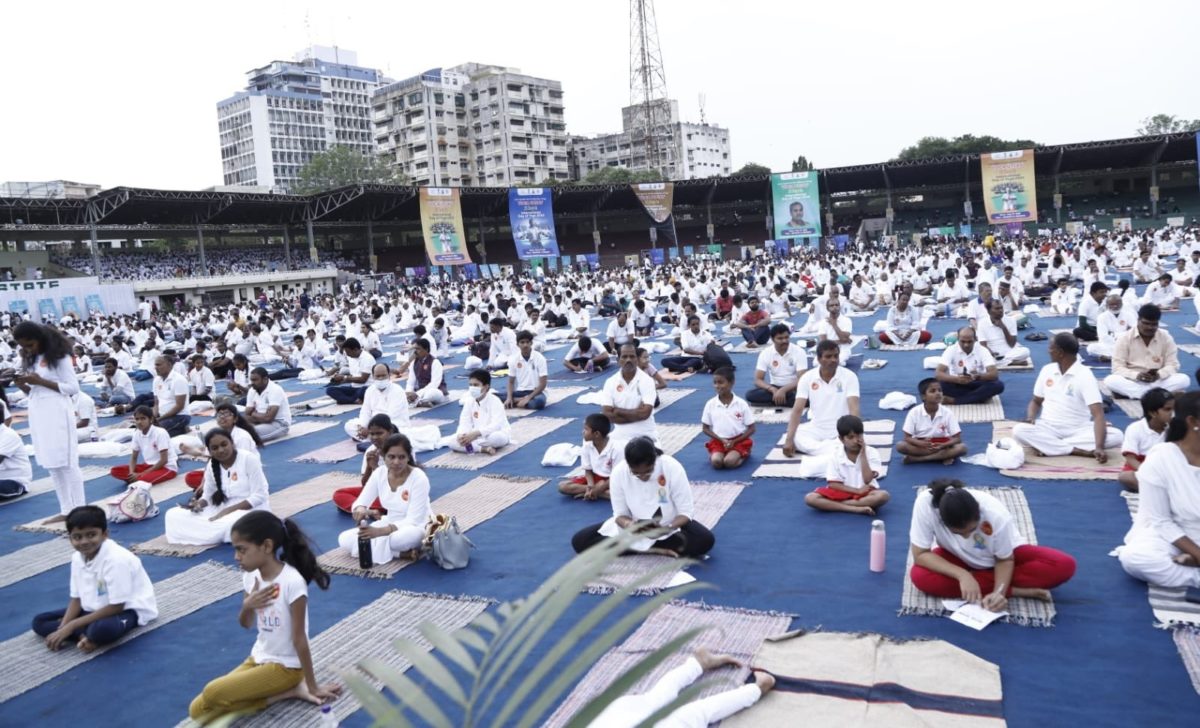 Hyderbad: Thousands of people from all walks of life joined the Yoga Utsav at Hyderabad here today to mark the 25 days countdown to International Day of Yoga (IDY2022). The event was organised by the Ministry of Ayush, Government of India with active support from Government of Telangana.

The event saw participation by the Governor of Telengana, Dr Tamilisai Soundararajan, who graced the occasion as the Chief Guest, along with the Union Minister for Ayush, Ports, Shipping & Waterways, Shri Sarbananda Sonowal; the Union Minister for Tourism, Culture & DoNER, Shri G Kishan Reddy; the MoS for Ayush and WCD Dr Munjpara Mahendrabhai Kalubhai; and the Minister of Finance, Health, Medical & Family Welfare in Government of Telegana, Shri Thanneeru Harish Rao. The theme of the Utsav was ‘Make Yoga a part of Your Life.’

The event was conducted by Morarji Desai National Institute of Yoga (MDNIY) under the Ministry of Ayush where more than 10,000 yoga enthusiasts performed Common Yoga Protocol (CYP). The session was directed by Dr Ishwar V. Basavaraddi, Director, MDNIY. The event was aimed at creating awareness about the various dimensions of Yoga and its ability to enrich human lives. The Utsav, whose theme is “Make Yoga a part of Your Life, was attended by many celebrities from the world of sports, cinema and culture performed CYP at the event along with other yoga enthusiasts.

Speaking on the occasion Shri Sarbananda Sonowal said that we must celebrate our rich heritage by making Yoga a part of our lives. It enriches our health & mind. He said that the success of today’s event will give further momentum towards the 8th International Day of Yoga on 21st June in Mysuru where Prime Minister Narendra Modiji will lead the elaborate celebration of Yoga by enthusiasts and practitioners across the world. The Minister said that the idea behind this Yoga Utsav is to encourage people to take up Yoga, a wonderful gift of our thousands of years of civilization, so that they can enrich their quality of life.

Shri Sonowal further announced another major attraction, known as “Guardian Ring”, whereby the yoga celebrations happening across the world will be relayed throughout the Yoga day. Every year, the missions abroad organise Yoga activities on International Day of Yoga. The Guardian Ring activity will string together the feed from different Missions.

The streaming will be initiated from Japan- the land of the rising Sun- at 6 AM local time and, then, move westward. As and when the sun rises, streaming will be done from other countries. There will be a live telecast on DD India. “The Guardian Ring” underlines “One Sun, One Earth” concept and showcases the unification power of Yoga. As part of our run up events, as many as 25 crores or more would joinin these Yog Utsavs at 75 iconic places across India as part of Azadi Ka Amrit Mahotsav, added the Minister.

The Yoga Utsav were also organised at five Archaeological sites viz. Rakhigari (Haryana), Hastinapur (Uttar Pradesh), Sivasagar (Assam), Dholavira (Gujarat) and Adichanallur (Tamil Nadu)) into “iconic” sites across India. The curtain raiser event to mark the 100 days countdown to IDY2022 was celebrated on 13th March while a 75 day countdown event was organized at the Red Fort in Delhi.

This was followed by a 50 day countdown event at Shiva Doul temple complex in Sivasagar, Assam on May 2, 2022. The celebration of International Day of Yoga on 21st June will be at Mysuru in Karnataka where Prime Minister of India, Narendra Modi will lead the Mass Yoga Demonstration. The Ministry is also planning to organise a Digital Yoga Exhibition at Mysuru to show case highlights and achievements of all previous editions of International Day of Yoga. The exhibition will also include strength of Yoga, best practice, research highlights, Common Yoga Protocol etc.

The eight edition of International Day of Yoga is being promoted through multiple programmes by the Ministry to take the message of Yoga across the world to a wider audience. The International Day of Yoga is celebrated across the world on June 21 every year. This year, the Yoga Utsav is being celebrated across 75 heritage sites of historical importance as part of ‘Azadi Ka Amrit Mahotsav’ in order to give a fillip to the brand India. All the ministries of the government, defence forces & other uniformed service organisations are working together to make this movement towards wellness through Yoga a grand success.

In order to bring everyone within the ambit of this movement, the Ministry of Ayush is planning to engage with all the Gram Panchayats across the length & breadth of the country. This will take the movement beyond the urban areas and into the heart of India. The Ministry is committed to encourage more and more participation from the rural areas.